I overslept a little today which resulted in me getting down to reception as we were due to leave which meant no breakfast today, I guess that will teach me!  We had a 4 hour drive to Penang today, the first 2 hours down the highlands winding left and right, luckily no one got car sick.

We were only in Penang for half a day so we had to quickly decide at lunch what we wanted to do. Everyone but Chloe, Sophie and Joanna choose Penang Hill.  You catch a funicular (type of train) up the 720 metres of the hill, it takes about 10 minutes and is extremely steep. The hill hosts the residence of the local governor and a small hotel. At the top the humidity disappears making it extremely pleasant.

We quickly found ourselves at a tea house, very English.  Tea and scones for most of the group and we just chilled out. Could have spent hours chatting and relaxing.  They had really weird monkeys in the trees, think the Gremlins movie and gizmo for their eyes.

Walking around we found an Indian Temple and great views of the surrounding area. Maria and Catherine left early to catch up with a friend from the last time they were here. Apparently we were very lucky with the great views. Taking the funicular down makes you appreciate the steep drop even move. I can see that when the English Governor was up this hill he would have had very few visitors.

For dinner I had Chinese from the local food court. Sophie, Chloe, Joanna, Cat and myself ended up at a pub with a happy hour until 10 pm. The corrupter Sophie got me onto cocktails, namely Sex on the Beach and a Screwdriver. This and a beer for dinner made for some good drinking. I got a good chance to speak to Cat about her experiences as a G Adventure Tour Leader plus we had another Tour Leader and G Adventure group on the next table. I decided to leave around 11.30 pm, over breakfast the next day I learned the party kicked on to 2 am, these girls are party animals! 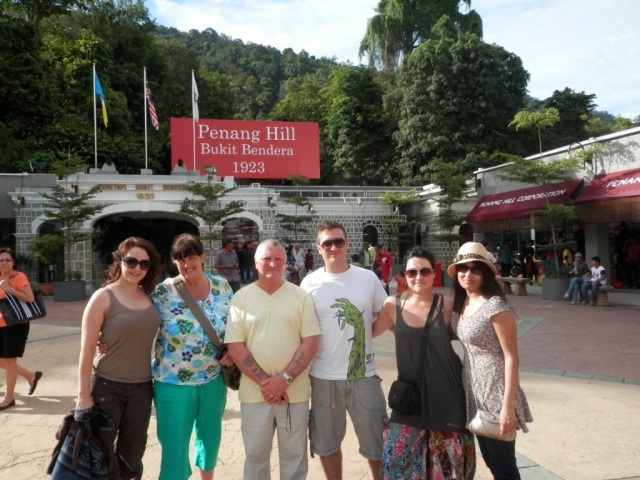 A World traveller who has so far experienced 71 countries in this amazing world. https://nathanburgessinsights.com/travel/
View all posts by Nathan →
This entry was posted in Travel, World Trip 2012-2013 and tagged Cameron Highlands, Malaysia, Penang, SouthEastAsia. Bookmark the permalink.