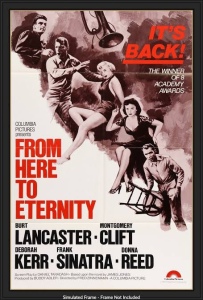 Plot
The movie begins in 1941 with Private Robert E. Lee Prewitt (Montgomery Clift) arriving at the Schofield Barracks in Hawaii, where he meets an old friend, Private Angelo Maggio (Frank Sinatra). The company commander, Captain Dana Holmes (Philip Ober), knowing that Prewitt is a talented boxer, urges him to join the company boxing team.  Captain Holmes believes that if his company wins Army boxing competition it will help him get promoted.

Prewitt refuses, we later learned the reason he has given up boxing as that he accidentally blinded a sparring partner. Sergeant Milton Warden (Burt Lancaster) urges Prewitt to reconsider, but Prewitt is adamant. Under orders from Holmes, the men in Prewitt’s company begin a campaign of harassment against Prewitt, though Maggio remains a loyal friend.

Meanwhile, Warden, at the risk of a prison sentence, begins an affair with Holmes’ neglected wife, Karen. Sergeant Maylon Stark has told Warden about Karen’s many previous affairs at Fort Bliss, including with himself. As their relationship develops, Warden asks Karen about her affairs to test her sincerity, and Karen relates that Holmes has been unfaithful to her most of their marriage. She miscarried one night after Holmes returned home from one of his dalliances, drunk and unable to call a doctor, rendering her barren. She then affirms her love for Warden, and encourages him to become an officer so she can divorce Holmes and marry him. Warden reluctantly agrees to consider it despite his dislike for officers.

Private Maggio takes Prewitt to a club, where Prewitt meets the hostess Lorene (Donna Reed) and he is immediately smitten. Later, Sergeant “Fatso” Judson (Ernest Borgnine) and Maggio almost have a fight, they do not get along.  At a later date Later, Judson provokes Maggio by taking a photograph of his sister from him, kissing it, and whispering in Prewitt’s ear. Maggio smashes a barstool over Judson’s head. Judson pulls a switchblade, but then, Warden intervenes. Judson backs down, but warns Maggio that sooner or later, he will end up in the stockade, where Judson is in charge.

As part of Prewitt’s punishment he is denied a weekend pass for months, eventually Warden who is coming to be impressed by Prewitt’s determination,  organises a weekend pass.  Prewitt uses the pass to go and see Lorene, who tells him that her real name is Alma. Maggio later arrives, in uniform and drunk, having walked off guard duty. He is court-martialled and sentenced to six months in the stockade, which is overseen by Judson who tortures Maggio for months.

As Prewitt and Alma get closer he talks about spending his life with her but Alma informs Prewitt she wants to marry a “proper” man with a “proper” job, and live a “proper” life and that the money from working at the club will make this possible and a ‘proper’ life doesn’t mean marrying a career military man.

Back at the base Sergeant Galovitch picks a fight with Prewitt while he is on detail, and a crowd gathers as the two start fighting. At first, Prewitt resorts only to body blows, and even then pulling his punches, but his fighting spirit re-emerges and he comes close to knocking Galovitch out before Holmes, who had been watching for some time from outside the crowd, finally steps in and stops the fight. Galovitch accuses Prewitt of starting the fight, but when the man in charge of the detail says that it was Galovitch, Holmes abruptly lets him off the hook and disperses the crowd.

The entire incident is witnessed by the base commander, who orders an investigation by the Inspector General. When the truth about Holmes is revealed to the commander he orders a court martial, but when Holmes begs for an alternative, an aide suggests that Holmes resign his commission; the commander orders Holmes’ resignation within the hour. Holmes’ replacement, Captain Ross, reprimands the others involved in the hazing and orders the boxing team’s framed photographs and trophies be destroyed; he then demotes Galovitch to a Private and puts him in charge of the latrine.

Maggio escapes from the stockade and, after telling of the torture and abuse he is suffering at Judson’s hands, dies in Prewitt’s arms. After tearfully playing Taps in tribute to his friend, Prewitt hunts Judson down for some payback, and while he didn’t start out wanting to kill Judson when it behinds a fight with knifes Judson is killed and Prewitt is injured.  Prewitt goes into hiding at Lorene’s house while Warden helps cover up Prewitt not being at roll call.

Warden informs Karen that he never applied for officer training, she realises they have no future together even with he husband in disgrace and decides to return to US mainland.

On 7 December 1941 the military is caught completely by surprise on Sunday morning when the Japanese commence a pre-dawn attack on Pearl Harbor. Against Lorene’s wishes, Prewitt attempts to re-join his company under cover of darkness, but is shot dead by a patrol guarding against possible saboteurs. Warden sadly notes the irony of the boxing tournament being cancelled because of the attack.

Karen and regretfully sails back to the mainland with her husband. On board the ship, Lorene and Karen meet, and Alma says that her fiancé, named Robert E. Lee Prewitt, was a bomber pilot who was heroically killed during the attack. The story of Prewitt, who was not a pilot or her fiancé will allow Alma to seek out a ‘proper’ life back home.  Karen recognises Prewitt’s name, but says nothing.

What’s to Like
The more realistic portrayal of military life, the complex human stories.

Thoughts
The miscarriage Karen Holmes experienced and the adultery committed by her husband Captain Dana Holmes and later herself by are very unusual topics to be covered at the time.  The adultery committed by Karen and Sergeant Milton Warden represented by there kissing on a beach become very iconic.  The death of Private Angelo Maggio by Sergeant Judson and the mistreatment of Prewitt by Captain Holmes puts military command in a bad light.  The movie is based on a novel which was more explicit and had stronger themes but had to be toned down by the Movie Studio.

No one really gets a happy ending with many characters dying and not from the Japanese attack, a marriage is destroyed, and military careers wrecked.  Alma does get her way out to a likely better life with money and an heroic story to tell and Sergeant Warden is likely better suited to war than peace time but their futures aren’t guaranteed.  In many ways this is a very dark movie set just before and up to the Pearly Harbour attack, the attack that renders most of the previous events in the movie as frivolous.