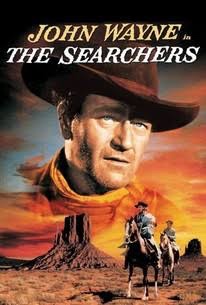 Plot
In 1868 a cabin door opens to show Ethan Edwards (John Wayne) returning after an eight-year absence to the home of his brother Aaron in the wilderness of West Texas. Ethan fought in the Civil War on the side of the Confederacy, and in the three years since that war ended, he apparently fought in the Mexican revolutionary war, as well. He has a large quantity of gold coins of uncertain origin in his possession, and a medal from the Mexican campaign that he gives to his eight-year-old niece, Debbie.

Shortly after Ethan’s arrival, cattle belonging to his brother’s neighbour Lars Jorgensen (John Qualen) are stolen. Rev. Captain Clayton (Ward Bond) comes seeking men for a search party he askes Ethan to take an oath of allegiance to the Texas Rangers but Ethan refuses saying it won’t be legal after his oath to the Confederacy, noting that Rev. Captain Samuel Clayton did as well.

They discover that the theft was a Comanche ploy to draw the men away from their families. When they return, they find the Edwards homestead in flames. Aaron, his wife Martha, and their son Ben are dead, and Debbie and her older sister Lucy have been abducted.

After a brief funeral, the men set out in pursuit. They come upon a burial ground of Comanches who were killed during the raid. Ethan mutilates one of the bodies. When they find the Comanche camp, Ethan recommends a frontal attack, but Clayton insists on a stealth approach to avoid killing the hostages. The camp is deserted, and further along the trail, the men ride into an ambush. Although they fend off the attack, the Rangers are left with too few men to fight the Indians directly and too many for a stealth operation.

Most of the men return home, leaving Ethan to continue his search for the girls with only Lucy’s fiancé, Brad Jorgensen and Debbie’s adopted brother, Martin Pawley (Jeffrey Hunter). Ethan finds Lucy brutally murdered and presumably raped in a canyon near the Comanche camp. In a blind rage, Brad rides directly into the Indian camp and is killed.

When winter arrives, Ethan and Martin lose the trail and return to the Jorgensen ranch. Martin is enthusiastically welcomed by the Jorgensens’ daughter Laurie, and Ethan finds a letter waiting for him from a trader named Futterman, who claims to have information about Debbie. Laurie declares herself for Martin.

Ethan, who would rather travel alone, leaves without Martin the next morning, but Laurie reluctantly provides Martin with a horse to catch up. At Futterman’s trading post, Ethan and Martin learn that Debbie has been taken by Scar (Henry Brandon), the chief of the Nawyecka band of Comanches. A year or more later, Laurie receives a letter from Martin describing the ongoing search. In reading the letter aloud, Laurie narrates the next few scenes, in which Ethan kills Futterman for trying to steal his money, Martin accidentally buys a Comanche wife, and the two men find a portion of Scar’s band killed by soldiers.

The search leads Ethan and Martin to a military fort where they find traumatised white women but not Debbie.  They then travel to New Mexico, where a Mexican man leads them to Scar. They find Debbie after five years, now an adolescent, living as one of Scar’s wives. She tells the men that she has become a Comanche, and wishes to remain with them. Ethan would rather see her dead than living as an Indian, and tries to shoot her, but Martin shields her with his body and a Comanche wounds Ethan with an arrow as they escape. Although Martin tends to Ethan’s wound and Ethan leaves Martin everything in his Will, Martin is furious with him for attempting to kill Debbie, and wishes him dead. “That’ll be the day,” Ethan replies, as they return home.

Meanwhile, Charlie McCorry has been courting Laurie in Martin’s absence. Ethan and Martin arrive home just as Charlie and Laurie’s wedding is about to begin. After a fistfight between Martin and Charlie, a nervous “Yankee” soldier, Lt. Greenhill, arrives with news that Ethan’s half-crazy friend Mose Harper (Hank Worden) has located Scar.

Clayton leads his men to the Comanche camp, this time for a direct attack, but Martin is allowed to sneak in ahead of the assault to find Debbie, who welcomes him. Martin kills Scar during the battle, and Ethan later scalps Scars. Ethan then locates Debbie, and pursues her on horseback. Martin fears that he will shoot her as he has promised, but instead he sweeps her up onto his saddle. “Let’s go home,” he says. Debbie is brought to the Jorgensen ranch, and Martin reunites with Laurie.

In the iconic closing scene, Ethan departs the homestead as he arrived—alone—clutching his arm, the cabin door slowly shutting on his receding image.

What’s to Like
The landscape, the fights, a sense of family overcoming tragedy.

What’s not to Like
The casual and sometimes over the top racism.

Thoughts
This is one of John Wayne’s most iconic movies and represent Director John Ford at the top of his game.   Ethan is a disillusioned war veteran who doesn’t seem to like anyone other than his brother’s  wife and their children.  His racism means he doesn’t even like Martin Pawley who is 1/8 Indian and who he saved as a kid and his brother raised. At first Ethan wants to save the girls but after Lucy dies and Debbie ‘comes of age’ he is planning to kill her as she is now Indian and not of his blood anymore.  Martin is the optimistic partner who apparently by the end rubs off just enough for Ethan to decide to save Debbie and return her to civilisation.

I’ve always loved Westerns, living on the frontier seemed so heroic when I was younger but as an adult it’s now tougher to look past the racism, still looking passed those issues it’s still a very enjoyable movie and even in the narrative it’s clear Ethan has no place in a civilised society as the house door closes.  Worth watching.