This was the third and final leg of three flights (two different airplanes) to get back home to Melbourne, Australia. The previous flight was from Frankfurt to New York on amazing A380.

I had a 15 hour 10 minute transit between flights to enjoy Singapore and the elegant Singapore Airlines Lounges.

This flight was from the Changi (Singapore) Airport to Tullamarine (Melbourne) Airport.

Airport Check In
Airport Check was done back in New York. However unusually security clearance is done at the boarding gate instead of when accessing airside part of the airport.

Boarding
We boarded from Gate A5 using priority boarding. As I was travelling in First Class I was given the first opportunity to board and was straight onto the plane.

The Seat
Singapore Airlines B777-300 First Class seats are in one row of 4 seats being setup 1-2-1 configuration in a very private cabin. For this flight there were three passengers and one empty seat (the one next to me). To turn the seat into bed mode you need a staff member to make the bed.

The bed while being on the hard side provides a lot of leg room and the two pillows provided were exceptionally soft and comfortable. However unlike the A380 seat / bed this one was a lot less comfortable as around my knees there was an uncomfortable ‘lump’ instead of a flat bed that I experienced earlier.

Amenity Kit
The amenity kit included associated facial creams. You are also given slippers, nice pyjamas and facial mask to aid sleeping. Separately I requested and was given a Singapore Airlines bear. 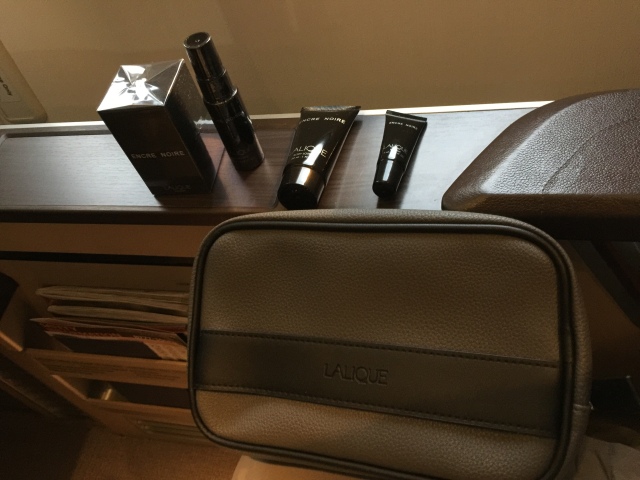 Meals
You are provided with pre-departure drink options.

During this flight we had both the Dinner option shortly after departure (served at 23.06 Singapore time) and Continental Breakfast shortly before arrival (6.00 Melbourne time).

Using the Book the Cook service there was a massive 69 dinner meal choices (see full listing here). I had the Lobster Thermidor which was amazing. I declined canapé, entry and dessert options and advise I wanted the main ASAP so I could maximise sleep given how tired I was (jetlag).

With dinner I ordered the famous Singapore Sling 🙂

I hadn’t planned on eating breakfast but having woken up I ended up ordering cornflakes and orange juice.

Service
The service was very strong for this flight. My request to move up the main meal was granted, I was provided with Singapore bear as requested and the staff were always looking to help me with anything it looked like I needed.

Entertainment System
The KrisWorld entertainment system was massive. I wanted to mostly sleep on this flight but I still watched Blackadder II while eating dinner.

The Flight
This was a smooth flight with no turbulence at least not while I was awake. The toilet on this B777 was much smaller than the A380 making changing into pyjamas a little harder but the toilet space size is similar to other airlines.

Arrival
We arrived slightly early. I mistakenly used the ‘fast track’ pass at Immigration but it would have actually been faster to use the eGate. My bag that I had last seen around 40 hours earlier in New York come out around 10 minutes after bags started coming out. Not the first despite the priority tag but definitely not the last.

The customs line was very long and it was only later I realised I could have used the fast track pass at this point as well and it would have saved my a bit of time. Heading back out into Melbourne weather I also realised fewer minutes in the cold worked out well for me.

A World traveller who has so far experienced 71 countries in this amazing world. https://nathanburgessinsights.com/travel/
View all posts by Nathan →
This entry was posted in Flight Reviews, Travel, World Trip 2019 and tagged B777-300, Singapore Airlines First Class, SQ227. Bookmark the permalink.