Today was split between the hectic Hanoi and the beautiful Halong Bay islands.  An early morning start meant evading a lot of motorcycles coming from every direction and a need to play human Frogger when trying to cross the road.  Lanes seem to mean little here, cars in the left lane can be going in either direction, and lights and crossings seem to mean even less.  To be fair I didn’t witness everyone getting hit despite expecting these every few seconds.

Before leaving Hanoi for our four hour bus ride to Halong Bay we paid our respects to Uncle Ho, the former Communist Leader of North Vietnam at the Ho Chi Minh Mausoleum.  The Mausoleum was built by the Soviets after the Vietnamese was reunited between North and South with the defeat of the USA.  There are pictures of Ho Chi Minh everywhere and they even renamed Saigon in the south to Ho Ch Minh City in his honour for defeating the capitalist west.

The heat and humidity was crazy high even at 8.30 am.  Watching the thousands and thousands of mostly locals lining up to see their former leader was impressive in this heat.  The soldiers in white uniforms, who didn’t seem to sweat, guarding this site was also impressive.

Apparently everyone in the North of the country and a lot in the South will visit the Mausoleum and pay their respects at least once in their life but many have done it multiple times.  In a system which doesn’t endorse any religions, worshipping a former leader is the closest thing.  We didn’t get to go into the Mausoleum as really we would have needed to camp out at 5 am to get in at a reasonable time.  Opposite the Mausoleum is the Country’s Parliament, I guess they wanted to stay close to their Dear Leader, for inspiration.

We then headed off to Halong Bay. During our 4 hour bus drive we stopped at a factory which sells high end arts and crafts made by victims of Agent Orange in support of these victims.  Some really classy stuff and I couldn’t help myself and once again bought another souvenir.  Our trip to Halong Bay was delayed by a broken down car in the road (or abandoned) which locked traffic back for quite a while, frustrating but to be expected at some point.

On arrival to Halong Bay it quickly become apparent why it is one of the seven natural wonders of the world.  The bay has over 2,000 inlets or islands and they are amazing, I have seem online photos of this place without even realising that this was all in Vietnam.

We transferred to the “StarFish” our boat for the next 24 hours and a welcome lunch however I barely had anything as a major headache was on me .  I suspect this was due to dehydration as a I had a lot of drinks high in sugar over the exit few hours and improved considerably as the day went on (but not totally).

Our cruise took as to Titov Island which allowed us to hike around 400 steps to a lookout point that provided exceptional views.  On returning it was time to unitise the beach and swim in the warm (but very nice) water which helped after the sweating from the hike.

Next up was an option of either kayaking or having a guide row you around the inlets.  Six of the group went for kayaking and four went for rowing, including myself.  I was a little jealous to miss out on the kayaking but still wasn’t at 100% and didn’t want to be in the middle of an hour on the water and let down the other person in the kayak.  The rowboat still got us to most of the best places and I even tried to row the big boat but I don’t think I got us to move at all! 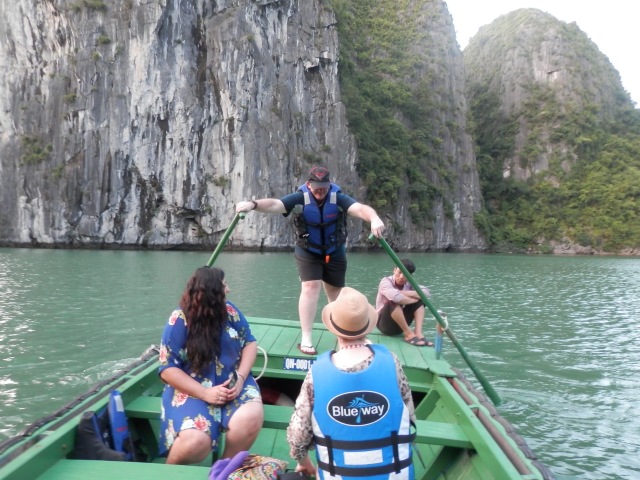 At dinner on the boat we had and excellent seafood meal which I enjoy, probably more since I skipped lunch.  Afterwards we relaxed around the boat, mostly on the open top deck, watching the moon and stars come out (it had been an exceptionally clear day which apparently only happens 2 out of 7 days).  However once the karaoke started I retired to my air conditioned cabin to read a good book and rest up for tomorrow.

A World traveller who has so far experienced 71 countries in this amazing world. https://nathanburgessinsights.com/travel/
View all posts by Nathan →
This entry was posted in Travel, World Trip 2016 and tagged GA-Discover-SE-Asia, Halong Bay, Hanoi, Vietnam. Bookmark the permalink.