Early morning start as we caught a bus to the Glacier National Park for our hike to Laguna de Los Tres. This turned out to be both awesome and very tough at the same time. The awesome part included hiking in snow while it was snowing!!

I learnt that my thermals will work well in Antarctica given in the first hour I was sweating! The bad part of the day was that the snow meant visibly was lower than ideal. It also meant we converted our planned route up one peak instead going a different way and visiting mother and daughter lakes and later a canyon from which we saw a condor. Well the second part was done only by Christopher, Ben, Kurt, myself and our mountain guide. Despite how hard the extra 3 hours were it was really worth the extra work.

The return hike was just has difficult unfortunately. At our last stop point I started thinking I should have better read the tour descriptions and gotten into better shape :(. Still I got though it a saw some amazing sights and we were virtually all by ourselves since it was so early in the season.

Crashing on our beds both Ben and myself discussed how good it would be if dinner was delivered. Unfortunately (fortunately) we had to have a shower and drag ourselves out to dinner at a local restaurant. Sleep was east to come by that night. Ben was a sleep about 5 minutes after the lights went out. 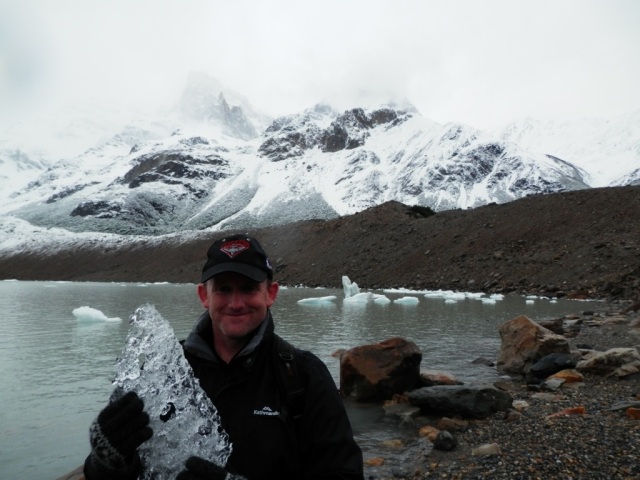 A World traveller who has so far experienced 71 countries in this amazing world. https://nathanburgessinsights.com/travel/
View all posts by Nathan →
This entry was posted in World Trip 2012 and tagged Argentina, Patagonia. Bookmark the permalink.