The last full day of this trip doing tourist things before heading home tomorrow on Singapore Airlines First Class turned out to be an amazing day, maybe the best of the trip.

First up was the Harlem Gospel Tour. The company I was using, Harlem Spirituals, was only 2 blocks from my hotel so very convenient. Starting at 9 am we headed off by bus to Harlem. Our guide Glen a third generation Harlem resident had lots of interesting stories including how Harlem was originally built for middle class white people and as a result even in the dark days of the late 1960s to mid 1980s Harlem has always been a beautiful place. The average price for a house in 1980s was $50,000 USD now it is $3 million USD, it is no longer a place for the poor.

We had three stops on this tour, the first was the Apollo Theatre which has launched many amazing careers over the years including Ella Fitzgerald, James Brown and Jimi Hendrix. The Apollo has an amazing history.

Our second stop was New York City College Harlem campus which has some very classic stone buildings. The majority of New York residence can attend this College for free as long as they have the grades.

One the grounds of the College was Alexander Hamilton’s home which was a funny coincidence given I was seeing the Hamilton Musical later tonight.

Our last tour stop was at a Gospel Church. This was more a practise session as the church service occurs on Sundays. The gospel group is run by the Addicts Rehabilitation Centre (ARC) and is a way for addicts to find focus away from drugs. You get a lot of hallelujahs during this hour long session and a push for audience members to speak up and later dance. This Gospel experience is all about energy and praising the Lord. Very glad I got a small look into this culture.

After the tour was finished those who had paid extra went to Sylvia’s restaurant for some soul food, most of which was fried! After lunch we caught the subway back to Times Square getting a little wet in the sudden downpour until we got to the safely of the stations.

That evening I joined my brother Reagan for ‘Hamilton’ The Musical. Reagan had given me a very expensive ticket ($350 USD / $500 AUD) as a thank you for organising his Qantas First and Business Class flights and what a thank you gift. Hamilton is a musical about the life of until now relatively unknown American Founding Father Alexander Hamilton. The musical uses hip hop, R&B, pop, soul, and traditional-style show tunes. The historical figures are mostly non-white actors to force a different understanding of the white Founding Fathers.

The Alexander Hamilton story is fascinating especially for someone who started of life with no money and limited opportunities; military leader in Revoluntary War, chief of army staff, a founding father, author of most of the Federalist papers, first Treasury Secretary (creating US currency), killed in a deadly duel with Aaron Burr (US Vice President).

In 2016, Hamilton received a record-setting 16 Tony nominations, winning 11, including Best Musical. It received the 2016 Grammy Award for Best Musical Theater Album and the 2016 Pulitzer Prize for Drama. Having seen the performance live I understand why this show is so successful. The songs are memorial and there is humour spread throughout in particular King George III. The performers are simply excellent, both singing and dancing.

The Hamilton musical is very expensive but if you have the money (which I currently do have) it is worth watching. This was especially for me as I love learning about history and this man was very remarkable. 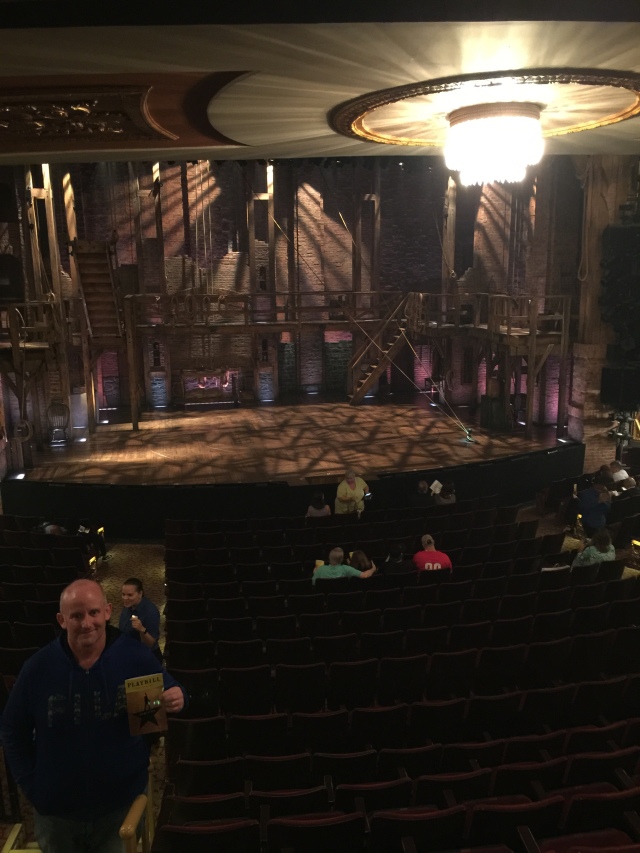 A World traveller who has so far experienced 71 countries in this amazing world. https://nathanburgessinsights.com/travel/
View all posts by Nathan →
This entry was posted in Travel, World Trip 2019 and tagged Hamilton, Harlem, New York City, USA. Bookmark the permalink.