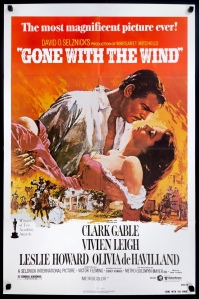 Plot
In 1861, on the eve of the American Civil War, Scarlett O’Hara (Vivien Leigh) lives at Tara, her family’s cotton plantation in Georgia, with her parents and two sisters and their many slaves. Scarlett learns that Ashley Wilkes (Leslie Howard), whom she secretly loves, is to be married to Melanie Hamilton (Olivia de Havilland), and the engagement is to be announced the next day at a barbecue at Ashley’s home, the nearby plantation Twelve Oaks.

At the Twelve Oaks party, Scarlett makes an advance on Ashley, but instead catches the attention of another guest, Rhett Butler (Clark Gable). The barbecue is disrupted by news of the declaration of war, and the men happily rush to enlist wanting to fight those damn Yankees. In a bid to arouse jealousy in Ashley, Scarlett marries Melanie’s younger brother Charles (Rand Brooks) before he leaves to fight.

Following Charles’s death while serving in the Confederate Army, Scarlett’s mother sends her to the Hamilton home in Atlanta, where she creates a scene by attending a charity bazaar in her mourning attire and waltzing with Rhett, now a blockade runner for the Confederacy.

The tide of war turns against the Confederacy after the Battle of Gettysburg, in which many of the men of Scarlett’s town are killed. Eight months later, as the city is besieged by the Union Army in the Atlanta Campaign, Melanie gives birth with Scarlett’s aid, and Rhett helps them flee the city.

Once out of the city, Rhett chooses to go off to fight, leaving Scarlett to make her own way back to Tara. Upon her return home, Scarlett finds Tara deserted, except for her father, her sisters, and two former slaves: Mammy (Hattie McDaniel) and Pork. Scarlett learns that her mother has just died of typhoid fever and her father has become senile. With Tara pillaged by Union troops and the fields untended, Scarlett vows she will do anything for the survival of her family and herself.

As the O’Haras work in the cotton fields, Scarlett’s father attempts to chase away a scalawag from his land, but is thrown from his horse and killed. With the defeat of the Confederacy, Ashley also returns, but finds he is of little help at Tara. When Scarlett begs him to run away with her, he confesses his desire for her and kisses her passionately, but says he cannot leave Melanie.

Unable to pay the Reconstructionist taxes imposed on Tara, Scarlett dupes her younger sister Suellen’s fiancé, the middle-aged and wealthy general store owner Frank Kennedy (Carroll Nye), into marrying her, by saying Suellen got tired of waiting and married another suitor.

Frank, Ashley, Rhett and several other accomplices make a night raid on a shanty town after Scarlett is attacked while driving through it alone, resulting in Frank’s death. Rhett saves Ashley from being arrested by Union soldiers saving his life.  With Frank’s funeral barely over, Rhett proposes to Scarlett and she accepts.

Rhett and Scarlett have a daughter whom Rhett names Bonnie Blue (Cammie King Conlon), but Scarlett, still pining for Ashley and chagrined at the perceived ruin of her figure, lets Rhett know that she wants no more children and that they will no longer share a bed.

One day at Frank’s mill, Scarlett and Ashley are seen embracing by Ashley’s sister, India, and harbouring an intense dislike of Scarlett she eagerly spreads rumours. Later that evening, Rhett, having heard the rumours, forces Scarlett to attend a birthday party for Ashley. Incapable of believing anything bad of her, Melanie stands by Scarlett’s side so that all know that she believes the gossip to be false. After returning home from the party, Scarlett finds Rhett downstairs drunk, and they argue about Ashley. Rhett kisses Scarlett against her will, stating his intent to have sex with her that night, and carries the struggling Scarlett to the bedroom.

The next day we see a happy Scarlett waking up.  Rhett apologizes for his behaviour and offers Scarlett a divorce, which she rejects, saying that it would be a disgrace. When Rhett returns from an extended trip to London with their daughter, Scarlett informs him that she is pregnant, but an argument ensues which results in her falling down a flight of stairs and suffering a miscarriage.

As she is recovering, tragedy strikes when Bonnie dies while attempting to jump a fence with her pony. Scarlett and Rhett visit Melanie, who has suffered complications arising from a new pregnancy, on her deathbed. As Scarlett consoles Ashley, Rhett prepares to leave Atlanta. Having finally realised that it was him she truly loved all along, and not Ashley, Scarlett pleads with Rhett to stay, but Rhett rebuffs her (“Frankly my dear I don’t give a damn”) and walks away into the morning fog, leaving her in tears on the staircase.

A distraught Scarlett resolves to return home to Tara the source of her strength, believing that one day she will get Rhett back.

What’s to Like
The historical setting, the music, the acting, the epic scope of this masterpiece.

What’s not to Like
The glamorising of slavery and the ‘civil’ society of the Southern States of America can be problematic.

Thoughts
This is an epic masterpiece with some of the best filmmakers and actors of the time.  Still it’s hard to separate the art from the glamorisation of the Southern lifestyle made possible for slavery.  The ‘Yankees’ are depicted as the barbarians or ‘bad’ people and the slaves as happy to work on the planation and even defend the South like when Big Sam happily goes to build trenches to protect Atlanta.  On occasions Rhett attempts to bring common sense calling the war a futile attempt to save a dying way of life but even he never calls out the evil of such an arrangement.

Surrounded by Confederate Flags Eurith D. Rivers, the governor of Georgia, declared the film premier, December 15 1939, a state holiday.  Hattie McDaniel, who won Best Supporting Actress, was absent from the premier, as she and the other black cast members were prevented from attending the premiere due to Georgia’s Jim Crow laws, which kept them from sitting with their white colleagues.

Despite this background I still enjoyed this film – t he collapse and devastation of the Old South during the American Civil War is a very significant historical event that change the fate of the USA which since World War 2 has been the dominate nation on the planet.  The production values, overcoming so many technical issues and the ambition of the film are outstanding.

The main leads are divided in two; Rhett and Scarlett are survivors willing to do whatever is necessary, whereas Ashley and especially Melanie attempt to live their lives based on higher ideals.  Melanie in particular is forgiving of those along her and gives her life to help others, she is Scarlett’s one true friend who defends her at all times.  Rhett is a war profiter but even he joins ‘the cause’ when it is doomed (and profiting for this as it is implied he made off with Confederate gold).  Scarlett is a force of nature always focused on what she believes she needs, even though it takes her the entire film to understand that is Rhett.  Scarlett’s force of nature is what allows her and her sisters to survive and eventually for Scarlett to thrive again.

While a problematic film that gives comfort to those who believe in the noble South and slavery it is still a masterpiece that deserves to be watched and appreciated as long as you understand the context of the time and the horror of the Southern lifestyle on African Americans.