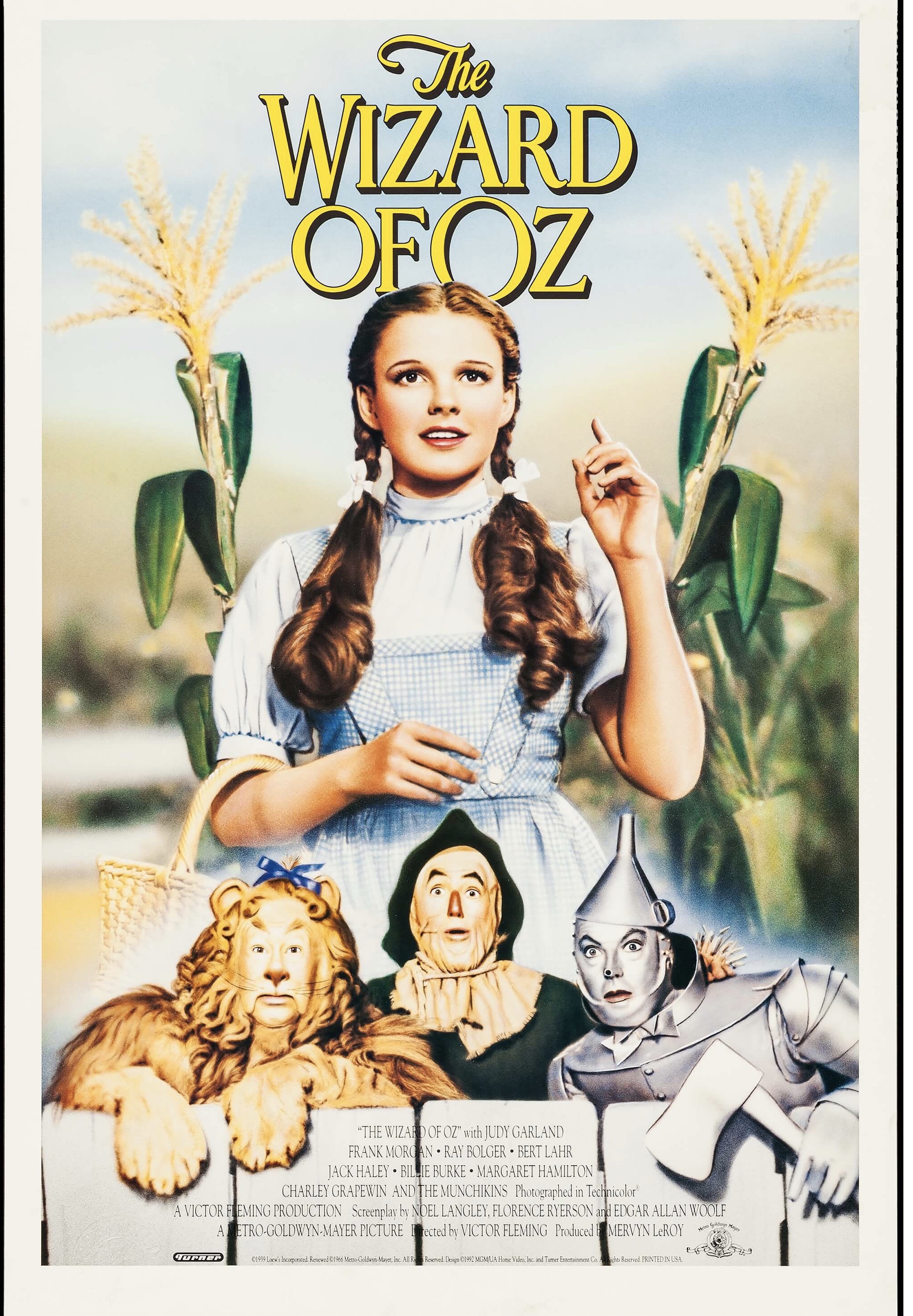 Plot
Dorothy Gale (Judy Garland) lives with her dog Toto on a Kansas farm belonging to her Aunt Em (Clara Blandick) and Uncle Henry (Charley Grapewin). Before the film starts Toto had bitten neighbour Miss Almira Gulch (Margaret Hamilton) on the leg.  The film starts in black and white with Miss Gulch who has obtained an order from the sheriff to euthanize Toto arriving at the farm to take the dog away.

In spite of Dorothy’s pleas and Aunt Em’s resistance, Miss Gulch takes Toto away in a basket, but Toto escapes and returns to Dorothy; she decides to run away in order to ensure that Toto won’t be euthanized. Not far from the farm, she meets Professor Marvel (Frank Morgan), a kind fortune teller who uses his crystal ball to make Dorothy believe that Aunt Em may be dying of a broken heart in order to get Dorothy to return home. Horrified, Dorothy rushes home as a storm approaches; a tornado forms.

Aunt Em, Uncle Henry, and the farmhands take shelter in the storm cellar as Dorothy arrives home. Dorothy seeks shelter in her bedroom. The window is blown in from its frame and hits Dorothy on the head, knocking her unconscious. The house is then seen spinning into the air, and Dorothy awaking to see various figures fly by, including Miss Gulch on her bicycle, who transforms into a witch on a broomstick.

Glinda tells Dorothy to keep the slippers on and follow the yellow brick road to the Emerald City, where she can ask the Wizard of Oz to help her return home. On her journey, Dorothy meets the Scarecrow (Ray Bolger), who wants a brain, the Tin Woodman (Jack Haley), who desires a heart, and the Cowardly Lion (Bert Lahr), who needs courage. Dorothy invites them to accompany her to Emerald City, where they can also ask the Wizard for help. Despite the Witch’s attempts to stop them, they reach the Emerald City and are eventually allowed to see the Wizard, who appears as a ghostly head surrounded by fire and smoke. He agrees to grant their wishes if they prove their worth by bringing him the Witch’s broomstick.

As the four of them and Toto make their way to the Witch’s castle, the Witch captures Dorothy and plots to kill her and retrieve the slippers. Toto escapes and leads her three friends to the castle. They ambush three guards, don their uniforms and free Dorothy. The Witch and her guards chase and surround them. The Witch sets fire to the Scarecrow, causing Dorothy to toss a bucket of water, inadvertently splashing the Witch, who melts away; the guards rejoice and give Dorothy her broomstick.

Upon their return to the Emerald City, the Wizard stalls in fulfilling his promises until Toto pulls back a curtain and exposes the “Wizard” as a middle-aged man operating machinery and speaking into a microphone. Admitting to being a humbug, he insists that he is “a good man but a bad wizard.” The Wizard then gives the Scarecrow a diploma, the Lion a medal and the Tin Man a ticking heart-shaped watch, helping them see that the attributes they sought were already within  them. He then offers to take Dorothy and Toto home in his hot air balloon, revealing that he is also from Kansas and was originally a carnival worker before a tornado brought him to the Emerald City, whereupon he accepted the job as Wizard due to hard times.

As Dorothy and the Wizard prepare to depart, the Wizard places the Scarecrow in charge of Emerald City, with the Tin Man and the Lion as his aides. Toto becomes distracted by a cat and leaps from Dorothy’s arms. As Dorothy pursues Toto, the balloon disembarks with the Wizard, unable to return, leaving her behind.

Glinda appears and tells Dorothy that the ruby slippers have the power to return her to Kansas. After sharing a tearful farewell with Scarecrow, Tin Man, and Lion, Dorothy follows Glinda’s instructions: she must close her eyes, tap her heels together three times, and state repeatedly, “There’s no place like home.” Dorothy complies and she wakes up in her bedroom surrounded by her family and friends, including Toto. Everyone dismisses her adventure as a dream, but Dorothy insists it was real and says she will never run away from home again before declaring, “There’s no place like home!”

What’s to Like
The music, special effects, comedy and story of the importance of home.

Thoughts
Considered one of the great fantasy films of all time The Wizard of Oz can be surprisingly scary for a film consider family friendly.  You are left decide for yourself where the events are real or just in Dorothy’s mind after she is knocked her by the tornado, but it is heavily implied to be a fantasy story given how many of the individuals in Dorothy’s life also show up in Oz.

Over the film Dorothy learns the value of those around her after she seeks to run away from her problems.  We all seek the better life ‘over the rainbow’ when growing up, the longing for the exciting world but as adults a lot of us what love a second childhood again when life is so full of possibilities.

A major focus of the film is how we all have hidden gifts inside us all.  The cowardly Lion can be brave, the Scarecrow can be smart enough to come up with plans, and the Tin-men can show great heart valuing his friends and their safety.  There is definitely a positive theme of self empowerment and the ability to move beyond the limits we place on ourselves.

The decision to make Kanas black and white and Oz in bright colour highlights the magnificent power of imagination and the ability our mind has for the grand.  The special effects are amazing for the time.

A classic well worth visiting.