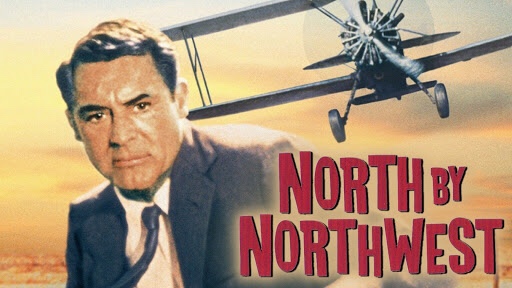 Synopsis:
A hapless New York advertising executive is mistaken for a government agent by a group of foreign spies, and is pursued across the country while he looks for a way to survive.

Thoughts:
Cary Grant plays Roger Thornhill, a hapless ad man who gets mistaken has a CIA agent while ducking his mother. Thornhill is then mistaken for “George Kaplan” and is kidnapped an interrogated. Despite Thornhill denying he is “George Kaplan“ this isn’t believed so the bad guys try to stage his death by forcing him to get drunk and having a driving accident. Thornhill manages to miraculously steer away from danger but is soon arrested for driving under the influence with both the police and his mother not believing him 🙂

Thornhill then spends most of the movie trying to clear his name as he chased across the country under the direction of the chilling Phillip Vandamm (played by James Mason), the spy master who imports and exports government secrets.

In the process of escaping death by car, the iconic biplane at a remote country bus stop and a near fall from Lincoln’s nose, Thornhill falls in love for the beautiful double agent Eve Kendall (played by Eva Marie Saint), who’s motives are rarely clear.

It’s only later revealed that ‘Kaplan‘ does not exist and was invented to distract Vandamm from the real government agent Eve Kendall. By the time Thornhill has the proof that he isn’t a spy he nobility goes along with the plan in order to keep Eve Kendall safe by staging his death.

This movie is a mystery thriller with some comedic moments. It’s amazing how good the outdoors scenes are given the technology of the time, the character interactions keep you guessing on what is happening and why and while you suspect our heroes will survive there are tense moments as either or both Roger Thornhill and Eve Kendall could perish as the movie reaches it’s thrilling end.

A World traveller who has so far experienced 71 countries in this amazing world. https://nathanburgessinsights.com/travel/
View all posts by Nathan →
This entry was posted in Movie Reviews and tagged Alfred Hitchcock, Cary Grant, Eva Marie Saint, James Mason, Top 100 Movie Review. Bookmark the permalink.