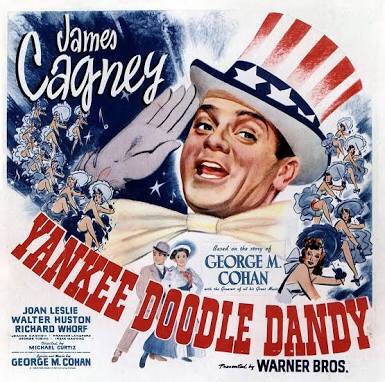 Synopsis:
Brought to the White House to receive a Congressional Gold Medal from President Franklin Delano Roosevelt, Broadway legend George M. Cohan (James Cagney) reflects on his life. Flashbacks trace Cohan’s rise, from a childhood performing in his family’s vaudeville act to his early days as a struggling Tin Pan Alley songwriter to his overwhelming success as an actor, writer, director and producer known for patriotic songs like “Yankee Doodle Dandy,” “You’re a Grand Old Flag” and “Over There.”

What’s to Like:
The songs, the dialogue and comedy in the different characters interactions.

What’s not to Like:
Patriotism is big in this movie which is understandable given it was made in War World 2 but some might not like this.

Thoughts:
I loved this movie with it’s comedy and music. Yankee Doodle Dandy is based on the real life of George M Cohan although it takes some liberties with the actual facts to provide a tighter narrative for a movie for example one sister instead of two. Cohan in real life received the Congressional Gold Medal with the movie placing this as occurring during WWII (he received it years earlier).

Cohan was born into the entertainment business but struggled for a considerable time due to his arrogance. Luckily for him some of this arrogance was well deserved as he eventually talked his way into a hit production with Sam Harris. A partnership based on trust and respect as they never had a contract but created some huge broadway hits (there is a scene with almost all of Broadway playing one of their hits).

Cohan had a very unique style half-singing and half-reciting songs which if James Cagney accurately copied must have been amazing to see in live performance.

While I wouldn’t normally go out of my way to see a musical film this is a great entertainment and affectionate look at an incredible entertainers history (even if it’s not 100% accurate). I found myself with these songs in my mind for days after viewing which tells me I really liked it.

A World traveller who has so far experienced 71 countries in this amazing world. https://nathanburgessinsights.com/travel/
View all posts by Nathan →
This entry was posted in Movie Reviews and tagged Top 100 Movie Review. Bookmark the permalink.