Last night I slept very well in our bush camp, maybe it was the fact we didn’t have animals chasing us yesterday unlike the las time I was in Chobe National Park but I suspect it was having a cot bed in my bed 🙂

I was up at 5.15 am a little earlier than planned but when you have to pee you have to pee. The breakfast around the morning fire was very enjoyable, maybe too enjoyable as the morning drive was supposed to start at 6.30 am but we left around 20 minutes late. However our guide went way overtime during this game drive, instead of being back at based by 9.30 am it was actually 11.00 am which made everyone happy.

The new tour members started like most people when first in Africa, stopping the game drive vehicle whenever an animal come into view but as the drive went on the antelopes and buffalo lost that privilege. 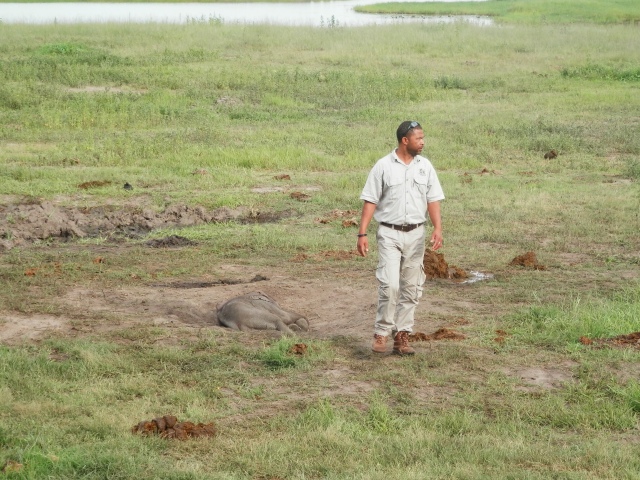 Memorable moments of the drive was seeing a dead baby elephant (sad) which just died probably from eating the wrong poisoned food, and seeing the wild dogs again which I totally didn’t expect. We also saw some crocodiles, elephants (live ones), and warthogs.

Arriving back at the campsite I was taken to reception who checked me into my hotel room while the rest of the tour group put up their tents. I used the saved time to organised some much needed clothes washing. About half the group went on the optional late afternoon water safari but I didn’t since I did this last time. I did however sign up and pay for the Okavango Delta flight on Friday 05 January.

Otherwise I tried to update this blog, upload photos and sleep in what turned out to be a very hot room (the shower however was very nice).

A World traveller who has so far experienced 71 countries in this amazing world. https://nathanburgessinsights.com/travel/
View all posts by Nathan →
This entry was posted in Travel, World Trip 2017-2018 and tagged Africa Travel Co, Botswana, Chobe National Park, On The Go Tours. Bookmark the permalink.