In many ways today was the most dangerous day I’ve spent travelling when in the space of a few minutes I experienced upset elephants undertaking mini charges at our 4WD and having past them saw a lion jump out of the bushes and chase after our vehicle. It’s enough to get your blood pumping fast for sure.

First things first I guess as we started the day by leaving behind Zambia and underwent a river crossing into Botswana. A nearby bridge under construction attempts to tell us that they will be more efficient ways to cross into another country but that’s what we have for now. At least the border crossing was relatively easy except that we had to wash all our shoes on a chemical covered mat.

We got to our staging ground campsite around lunchtime and all group members had decided to to a Water Safari in Chobe National Park with the exception of Maggie. We had to pack everything for the later bush camp and eat lunch before leaving.

The water safari gave us a change to see animals for a different perspective in particular getting closer to the hippocampus without worry of being killed for a bonus. We also got to watch families of elephants come down to cool off, drink and even wash themselves in the Chobe River. This tour went for approximately 3 hours and was a good way to enjoy the afternoon. At this point I thought this has been a good day, but better was to come.

As soon as we land ashore it was into the 4WD for the included Chobe National Park Dusk Game Drive this time with Maggie. The major early highlight of the game drive was finding a pride of 15 lions, just earlier we had seen a day old kill of a giraffe that a lioness was still eating.

However seeing so many lions in one place was even more remarkable. But it got even better when the pride run off a young male lion who was trying to join the pride. I got great video footage of the lions fighting. 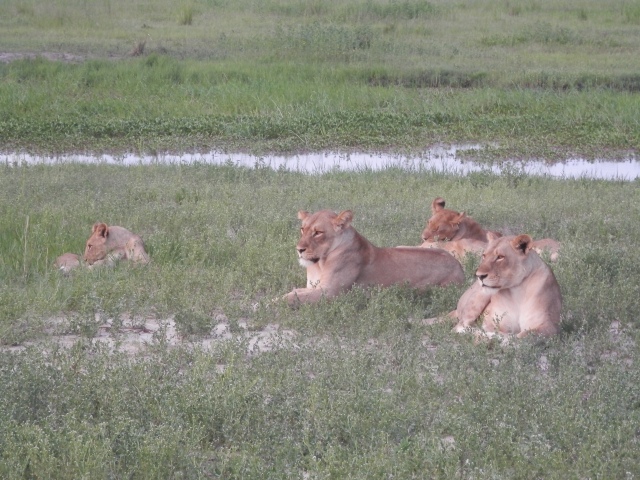 the During the drive we also encountered baby baboons, elephants (nice ones at first), antelopes (Sable and Roan) and monkeys. 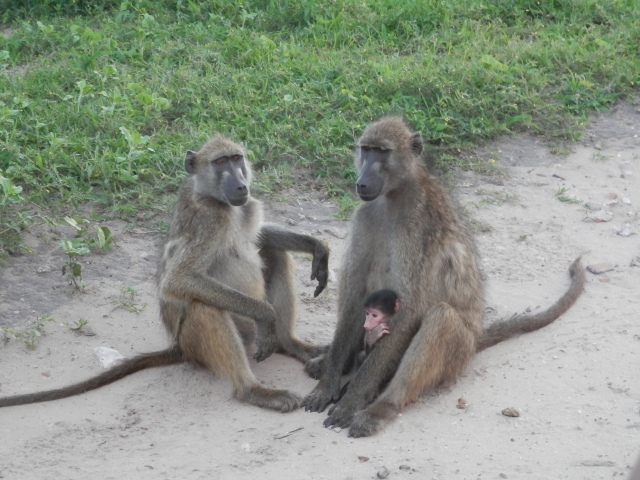 At end of the game drive however come the more serious encounters. First up we found some elephants in heat and one in particular was very upset with our presence and began trumpeting and doing mini charges at the 4WD. This lead some of our group to want to get out of the area but our guide / driver thought it was great. He later explained that the elephants actions were just to scare us and he had no intention of ramming us, obviously us tourists didn’t know this fact!

Then just as we got past the elephants I was talking to Arran who was in the back row of the vehicle with me when I saw a lion jump out of the bushes and start chasing us! I could barely get the words out ‘LION’ or what I should have said ‘get you arm back inside the vehicle’ but could get that out. The lion got within about an arms length of us and then gave up. Those 5 seconds were extremely scary but just as we got a little distance away another lion jump out ahead of us, this was obviously a hunting trap for unsuspecting animals which got pulled on us instead. We eventually got past the lion ahead of us but by now almost everyone but Arran and our driver was a little freaked. We wanted nature but we didn’t want nature to want to kill us 🙂

We then drove roughly 8 minutes to our campsite. This was a bush camp, there were no structures other than what we put up ourselves. The safari company did put up our tents for us which was welcome and they did dig a hole for a toilet but a few in the group wanted to get further away from the lions and elephants. During our meal the local guides explained the rules of the campsite, basically don’t make much noise, don’t go to the toilet without someone with you, and try not to leave your tent once you have settled. There were a couple of semi serious questions about sleeping in a locked vehicle but all the vehicle’s here are open and can’t be enclosed.

We finished by sitting around a fire retelling the days unexpected adventures and signing our cook Duncan a happy birthday which he seemed to really appreciate, especially the cake that Roz had managed to get to the campsite without Duncan realising. I thought what a crazy day as I tried to sleep in my tent listening to lions in the background and other animals walking around. This is the real wild.

A World traveller who has so far experienced 71 countries in this amazing world. https://nathanburgessinsights.com/travel/
View all posts by Nathan →
This entry was posted in Travel, World Trip 2017-2018 and tagged Africa Travel Co, Botswana, Chobe National Park, Elephants, Lions, Livingstone, On The Go Tours, Zambia. Bookmark the permalink.