The positioning flight to Sydney for my later flight Bangkok. Arriving at Melbourne airport at 4.40 am on a Saturday morning I was taken by how few people are actually at the airport. I have caught the first flight of the day, QF400 Melbourne to Sydney, for work previously and while I usually got there around 5.20 am it was always busy, especially on Monday or Tuesday.

First up was checking my faithful backpack for this domestic flight, something I haven’t done in probably 4 years despite me averaging around 26 domestic flights per year I usually pack very light for multiple day work trips an avoid checking bags like the plague. No problems checking the bag through to Bangkok other than having to show a print version of ITN, no idea why since all flights (but the Bangkok Airlines) are on the same return ticket but a good reminder that you always need a print out of your ticket when traveling internationally. Let’s hope the bag shows up in Bangkok.

I was one of the first people though security but two gentlemen in front of me kept having to be re-screened for multiple items on their person. I waited for the QANTAS Lounge to open, another first, although I have waited before for the bar to open at noon however! It was weird seeing no one but staff in the Qantas Melbourne Domestic Lounge.

The flight boarded from Gate 3 around 5 minutes early at 5.35 am. The 737-800 was very full, I didn’t see many empty seats, I did however see a few people wearing Sydney Swans (Australian Football League) gear, I guess these supporters left Geelong after last night’s match and stayed at the airport hotel.

On a work day my Exit Row seat mates are usually bigger than average guys like me, today in 13A and 13B it was young girls (20 years old tops but likely 17-18) who both used the serving table as headrests to sleep shortly after takeoff. I’m guessing they got up even earlier than me for this flight.

I turned down the breakfast (cereal and a yogurt) as I knew I had a Business Lounge visit and multiple meals on my next flight. The flight was uneventful, the flight attendants were quick and professional serving meals on this short 1 hour 15 minute flight. The flight landed a little early at 7.15 am from here it was a quick walk to Gate 15 for the International Transfer Gate and a bus ride across to the International Terminal. 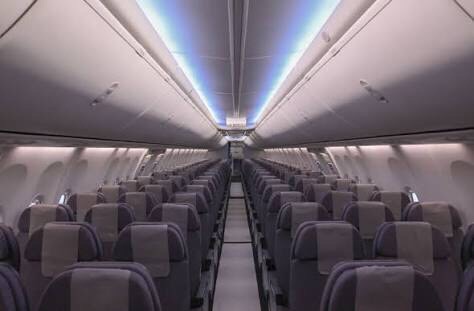 A World traveller who has so far experienced 71 countries in this amazing world. https://nathanburgessinsights.com/travel/
View all posts by Nathan →
This entry was posted in Flight Reviews, Travel, World Trip 2016 and tagged Qantas, QF400. Bookmark the permalink.