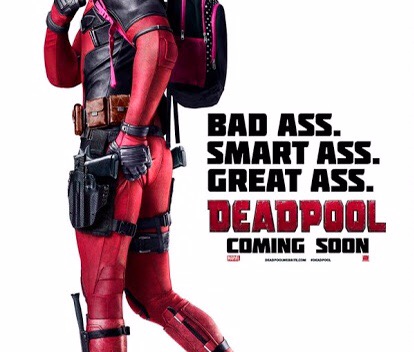 Synopsis
A former Special Forces operative turned mercenary is subjected to a rogue experiment that leaves him with accelerated healing powers, adopting the alter ego Deadpool.

Review (warning spoilers)
Super hero movies are everywhere in particular Marvel related properties that split with Fox (X-Men and Fantastic Four), Sony (Spider-man) and Disney (everything else Marvel) so it takes a lot to stand out.

Most super hero movies play it safe, go for a PG rating, have an uplifting story, good always wins and wins the right way (not unnecessary deaths, don’t kill the villain if at all possible), the hero is someone everyone can look up to, and the hero is in a better place than the start of the movie.  That’s not the case here.

Deadpool is a balls to the wall movie, Wade / Deadpool is not exactly a nice guy he mostly seems okay because of the asses he tracks downs and kills.  He isn’t motivated by doing the right thing but instead revenge and doesn’t care a great deal about the destruction he causes in bringing it.

The movie is hilarious with cross references to other movies and I don’t mean just Fox Marvel movies, Ryan Reynolds makes fun of himself as former sexist man and the god awful Green Lantern movie he starred in.  There are two minor X-Men characters used to show how this links to the Fox Universe but even that is made fun of (“A big house but only two mutants, it’s almost like we didn’t have enough money to hire anyone else!”).

The movie doesn’t the origin story well, in flash backs at the right times (and even makes fun fast forwarding at one point).   This is an R rated Super Hero movie which the fans deserved.  Not every blockbuster movie needs to be aimed at 8 year olds who will drag their parents along.

Ryan Reynolds obviously was having fun.  The stunning Morena Bacarrin plays the love interest who is just as messed up as Deadpool in that they have the same weird sense of humour and view on life.  In fact it appears as if everyone was having a ton of fun making this movie that took 10 years to get approved and need the fans to demand this crazy assed character get an R rate movie that was as meta and four wall breaking as the comics and video games.  It is a great ride.

Recommendation: A movie aimed a adults, mostly males but hardcore female gamers would love it as well, instead of your typical family super hero movie, if you love action, blood, coarse comedy and meta references you are in heaven with this movie.

A World traveller who has so far experienced 71 countries in this amazing world. https://nathanburgessinsights.com/travel/
View all posts by Nathan →
This entry was posted in Reviews. Bookmark the permalink.