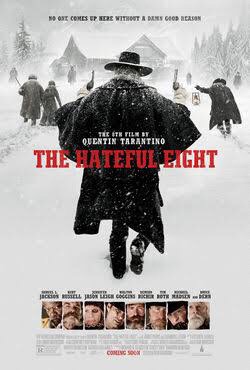 Synopsis
While racing toward the town of Red Rock in post-Civil War Wyoming, bounty hunter John “The Hangman” Ruth (Kurt Russell) and his fugitive prisoner (Jennifer Jason Leigh) encounter another bounty hunter (Samuel L. Jackson) and a man who claims to be a sheriff. Hoping to find shelter from a blizzard, the group travels to a stagecoach stopover located on a mountain pass. Greeted there by four strangers, the eight travellers soon learn that they may not make it to their destination after all.

Review (warning spoilers)
It was with some excitement I went to the Astor to see Quentin Tarantino’s latest film ‘The Hateful Eight’ in extreme widescreen. Tanatino was aiming for an old style film format with the movie having an extended opening scene with live music (at least for this special event version at the Astor), old style/font credits and 70 mm version. Sitting in the historic Astor Theatre it was easy to recall an era without the multiplex especially as I was sitting in a balcony view.

Tarantino movies almost always have great dialogue, rapid fire conversations that usually go in directions you can’t pick. In this film Tarantino again brings the dialogue but as also can happen struggles with the conclusion of the film without having to go to crazy lengths to resolve the issues, usually only through extreme violence.

The movie bought back several actors who obviously love working with Tarantino (Samuel L Jackson, Michael Madsen) and lots of great landscape scenery during a winter in Wyoming which causes our cast to have to at first travel together and later take refuge at “Minnie’s” for a few days.

There is a lot of misdirection during the film. Samuel L Jackson’s character has issues with racism he has experienced in his life and has no problems getting an old Confederate General draw first so Jackson can claim a ‘legal’ kill. The flashbacks of when Jackson explains to the General what happened to his son are intense which causes us to miss the plots happening around Minnie’s.

If you blink you will miss key details that on reflection reveal the different players agendas, nothing is what it seems and the story in front of you is mostly used to hide the main plot. As is the want of Tarantino movies unexpected violence is suddenly used to move the story forward. The are no real heroes here, no one is safe or pure. The love of a brother to save his sister might be a pure good but attempted by the most evil characters.

The racism and segregation of the era makes you think that a self-proclaimed red neck former Confederate officer now Sheriff Chris Mannix (a fun Walton Goggins) would never team up with a black bounty hunter (Jackson) but in the end the harsh environment makes their alignment make sense. These are the two characters who are the most honest with each other (they hate each other based on race) meaning they have the most honest relationship and in the end can trust each other.

The main surprise for me was the violence ‘The Hangman’ (Kurt Russell) inflicted on his fugitive Daisy (Jennifer Jason Leigh). I guess a Tarantino movie can get away with non-politically correct actions in violence against females but then again Daisy is no rose and has killed many men herself.

Recommendation: While not the best Tarantino movie if you like his style or you like Samuel L Jackson you will find this a very enjoyable movie.

A World traveller who has so far experienced 71 countries in this amazing world. https://nathanburgessinsights.com/travel/
View all posts by Nathan →
This entry was posted in Reviews. Bookmark the permalink.