Each year since the Australian Open moved to Melbourne Park (formerly Flinders Park) in 1988 I’ve attended at least one day with the exceptions being 2000, 2010, and 2013 when I was travelling overseas.  Living in Melbourne means I get to see the best players in the world playing in the first Grand Slam Tournament of the year.  In fact the venue is only about a 20 minute walk from my apartment in Southbank and day passes are extremely cheap (currently $30-$45 depending on which day) and you get to see 10-12 hours of some of the best players in the world.

This year colleagues from my former area got me a day pass ticket for the Friday of the first week (Day 5).  This turned out to be a rainy Melbourne day but that wasn’t a problem as the day pass gets you into Hisense Arena which has a retractable roof so was undercover for the majority of the day.

So while this meant I missed walking around the outside courts and watching players from a few metres away I still go to see four good to great matches:

The day started with a ticketing SNAFU but I still got in to the venue in time for the first match and my brother Reagan had saved seats in Hisense Arena about 8 rows back which gave a great view of the players and tennis.  My brother was disappointed in the first match as he backed Dominic Thie to win in 4 sets.  Tennis is starting to get caught up in betting scandals.  When I first went to the Australian Open in 1988 as a 14 year old they had only just started betting on sporting matches but then it was who would win the tournament, now you and bet on individual matches and individual set scores!  It’s not a surprise gambling would lead to some corrupt practises but I’d find it hard to believe it occurs at Grand Slam event given big prize money and huge ranking points on offer.

The second match was very exciting.  I don’t think I’ve ever seen a player lose their first set 6-0 and end up winning but after seeing Anna-Lena Friedsam get trashed so easily in the first set that the first 3 games were over in 8 minutes she somehow turned it all around. It was crazy exciting stuff and shows why you should never give up until the game is over.

In the third match Gilles Simon has just to good for Federico Delbonis.  Federico had a big serve to go with his height but not the shots.  Basically this was the weakest match and I wanted to to end as quickly as possible for what I saw as the main event.

The fourth match highlighted everything that makes tennis great to watch.  Firstly they opened up the roof for the first time so they played under the stars.  Newly minted Australian (born in Russia but lives in Melbourne) Daria (Dasha) Gaveilova played some very hard tennis to beat the higher ranked Kristina Mladenovic who probably played better then Dasha.  The match went over 2 hours 50 minutes and up until the last point anyone could have won.  Kristina’s first serve was usually about 175 kmph versus Dasha’s 140 kmph.  As a result Dasha’s serve was always under pressure but somehow she won.  Kristina’s return of serve was also better and had a lot more power.  Really Kristina should have won but guts and determination with a positive attitude and sometimes can get you past a better player. 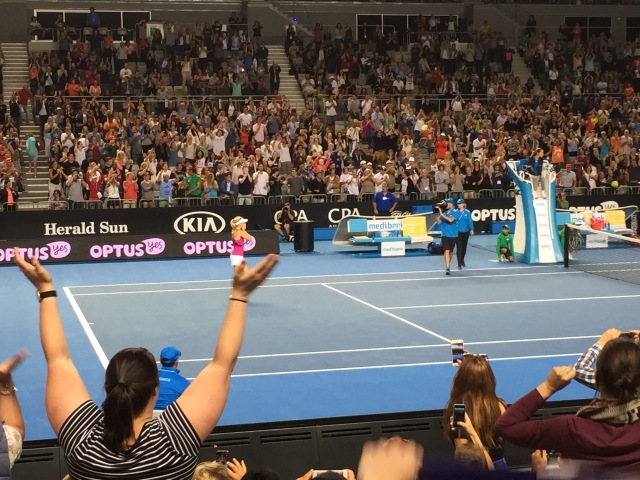 Daria (Dasha) is going to be huge local favourite.  Most Australians wouldn’t have know who she was even two months ago but since teaming up with Nick Kyrgios to win the 2016 Hopman Cup for Australia for only the second time ever.  Add that with the enthusiasm and never give up attitude and I see big things for her future.  After this tournament Daria will go to her highest ranked position (somewhere in the top 30) and with at least an extra $200,000 in prize money to help fund her travel in 2016.

Leaving the venue at 10.30 pm roughly 11.5 hours after arriving I realised just how lucky I am to live in the sporting capital of Australia and maybe the world.  Walking along the Yarra River back home with music blazing and happy people dancing after I experienced first class infrastructure at the venue I realised just how lucky I was to been born and live in Melbourne.

A World traveller who has so far experienced 71 countries in this amazing world. https://nathanburgessinsights.com/travel/
View all posts by Nathan →
This entry was posted in Sport and tagged AusOpen. Bookmark the permalink.