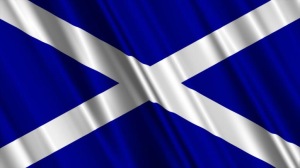 The Kingdom of Scotland emerged during the Middle Ages and continued to exist until 1707. By inheritance in 1603, King James VI of Scotland became king of England and Ireland, thus forming a union of the three kingdoms. Scotland entered into a political union with England on 1 May 1707. In 1997, a Scottish Parliament was re-established, in the form of a devolved legislature having authority over many areas of domestic policy.

Scotland played a major role in the British effort in the First World War with a population of 4.8 million in 1911, Scotland sent over half a million men to the war, of whom over a quarter died in combat or from disease.

The climate of most of Scotland is temperate and oceanic, and tends to be very changeable like my home of Melbourne back in Australia but a lot colder.

The beautiful country of Scotland has been considering fully moving away from the United Kingdom which was being discussed when I visited during my 1999-2000 world trip and has around 42-52% support at anyone time.

From my visit I still recall the cold days of winter and the strong winds as I walked the Royal and Ancient Golf Club at St Andrews.  A beautiful country, lots of green mountains and ancient Cathedrals.  Edinburgh and the Golden Mile is worth it alone.  How I wish to see Scotland again and stay in or near an ancient castle.

A World traveller who has so far experienced 71 countries in this amazing world. https://nathanburgessinsights.com/travel/
View all posts by Nathan →
This entry was posted in Travel. Bookmark the permalink.