I tried some toast this morning, hopefully this means I’m getting better but I still can barely eat.  I’ve missed several of the included breakfasts so far and my energy levels aren’t great but hopefully that is changing.

Our drive started at 9.15 today to Kumarakom.  Along the way we stopped at Tripunithura Hill Palace the former seat of government for this state.  The grounds are stunning, and we were informed that a lot of movies use this location which isn’t surprising.

The museum included old weapons (spears, daggers, swords) and the old currency.  The coins were tiny, I’m surprised people didn’t lose these coins all the time.  We also got to visit the deer farm and see the spotted deer who didn’t mind the heat at all somehow.  The gardens included all kinds of plants and trees and a giant plastic dinosaur!

We arrived at our hotel around 1 pm and I decided to skip lunch but a cold lemande sure hit the spot.

The biggest highlight of the day started at 4.15 pm with our boat ride around the backwaters of Kumarakom.  We got to see life around the narrow river, people washing clothes, cooking meals and children playing and swimming. Just behind the river walls were rice fields which the locals were struggling to clear the water from so they could complete their harvest before monsoon season.

Back on shore we walked the banks of the river finally sitting down and watching the a spectacular sunset.  Before we left we thought it would rain but we got very lucky.

That evening before dinner I went down to reception to connect to the internet but instead I was mobbed by Indian guests who wanted photos of me a white person, I felt like a TV star 🙂  Whole families, children, husbands wanting to take a photo of their wife sitting with me it was chaos for a little while.  Sajin explained later they come from a region that never sees white people.  During dinner this photo taking situation continued with the girls as well. 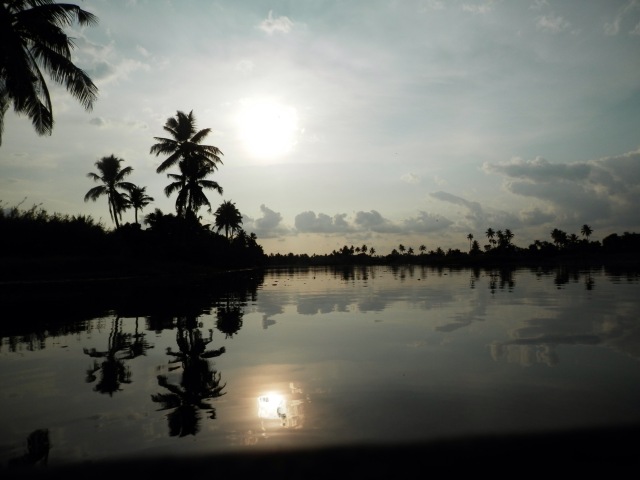 A World traveller who has so far experienced 71 countries in this amazing world. https://nathanburgessinsights.com/travel/
View all posts by Nathan →
This entry was posted in Travel, World Trip 2015 and tagged India, IndiaG, IndiaS1, Kochi, Kumarakom. Bookmark the permalink.