I woke up in the Honduras version of Paradise, great sun, a nice beach and relaxing water rolling in.

Today my original plan was do as little as possible but my plans changed. Visiting the major (only) road at West Point I found myself buying a new shirt and some snacks. I really noticed an increase in Americans staying here which is a sure sign a lot of tourists visit. Prices on the island are still cheap but a lot more expensive than elsewhere. Most of the prices are charged in US dollars as well.

During lunch at a local restaurant on the beach Robin invited my to join her and James on a boat ride out to the reef for some snorkelling. The sea looked too go to ignore so my do nothing day as scraped for the sea 🙂

We went to two different locations and it was amazing! The first point I got to see a sea turtle!! After missing out at Caye Caulker I was extremely happy to see my first sea turtle up close.

The reef was very close to the top of the water so you had to find a way though like a maze. I thoroughly enjoyed the maze and the sudden reward when the ocean opened up and there was sea life everywhere.

The second snorkelling stop wasn’t as good but I got to see a lobster and some type of squid like creatures along with a sea snake. An amazing few hours that I only experienced thanks to Robins generous invite.

For dinner Gabo organised for a local lady to cook sea food that was caught in the last 24 hours in these waters. This was followed by a fire on the beach and roasting marshmallows under the stars, very nice end to today. 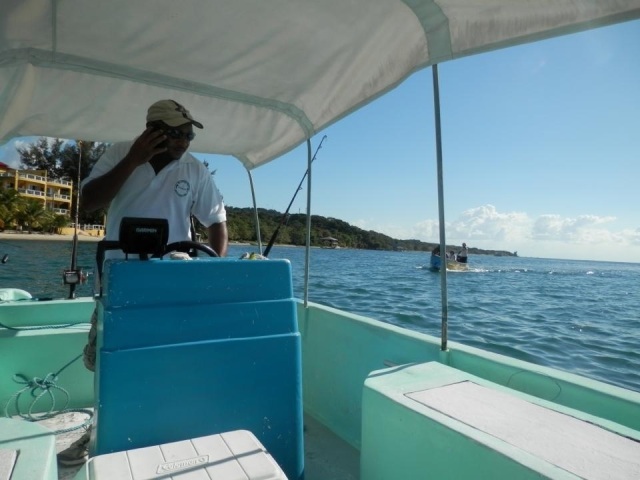 A World traveller who has so far experienced 71 countries in this amazing world. https://nathanburgessinsights.com/travel/
View all posts by Nathan →
This entry was posted in Travel, World Trip 2012-2013 and tagged Honduras, Roatan Bay Islands, VolcanoTrail. Bookmark the permalink.