Wednesday 2 January 2013
Highlights: Snorkelling and cruising in the Caribbean.

Today the majority of the group opted for a day of snorkelling in the Caribbean and exploring the second largest coral reef in the world after the Barrier Reef in Australia. As we had 14 people Andrea managed to organise a boat just for our group 🙂

Our boat for the day was the Raga Gal a locally made ship with Captain Harry (or Captain Caveman as he preferred) and second mate Richard. They served lots of water initially and later lots of strong rum and punch.

We had three stops during the day. At our first stop the first 30 minutes of snorkelling was mostly to learn how to use our equipment and to see the reef. We had lunch at this location and were encouraged to feed the fish with our leftovers.

Second stop had an explosion of fish, nurse sharks and stingrays. Captain Caveman caught a shark and a stingray so we could carefully pat and touch them. The captain also throw some food into the water and we got to watch a stingray and shark fight for who got to eat. I was very careful with the stingrays in the area.

Our last stop was to visit an underwater cave and try to see turtles. Unfortunately I missed the turtles, others saw them, but instead I experienced closer than I intended some rare spotted stingrays which can be very deadly.

From here it was a gentle trip back to Caye Caulker drinking rum and listening to music and some singing. I had my feet of the boat letting the warm ocean water smash into my legs. Very cool and calming watching the sunset.

For dinner we ate on the beach and let the warm night air relax and comfort us. 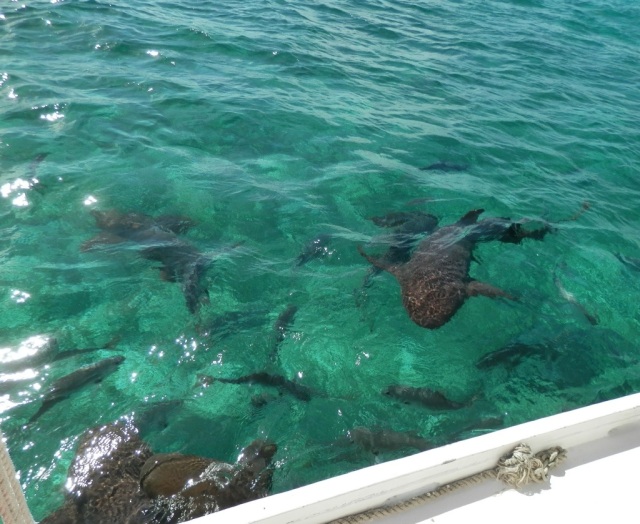 A World traveller who has so far experienced 71 countries in this amazing world. https://nathanburgessinsights.com/travel/
View all posts by Nathan →
This entry was posted in Travel, World Trip 2012-2013 and tagged Belize, Caye Caulker, MayanSun. Bookmark the permalink.