Jon had organised to borrow Jeanne’s car so we could head out to Stonehenge for a day trip. It took about 2-3 hours to get there including our lunch/pit stop. It’s amazing to visit a site that is believed to have been around for over 4,000 years. The thing I got from the audio commentary was how much they don’t know! The one thing we do know is that the stones keep a good monthly calendar if the location of the sun at different times of the year. Whoever designed this was clear even by today’s computer assisted standards.

On our return to the flat Jon thought it was a good idea to go on another London Walking Tour. Because we waited for the tennis to finished, which went on forever with Roger Federer winning an epic by finally breaking Andy Roddick in the 5th set, we really only had the Ghost Walk tour to go on. I said goodbye to Jeanne since she was working the nightshift so I wouldn’t see her before I left tomorrow and off we went for the 7.30 pm walk. I’m not a big fan of Ghost Walk tours but this one was good as it concentrated on stories of locations and deaths more than ghost. Plus the guide obviously was an actor so he could really play the part of some of the victims and investigators. At the end of the tour we walked over the Millennium Bridge and once again had dinner at a Greek Restaurant near the Globe Theatre just as we did way back in 2006 before I left. 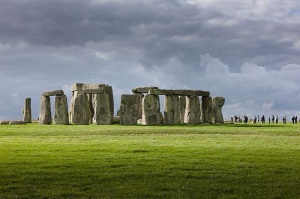 A World traveller who has so far experienced 71 countries in this amazing world. https://nathanburgessinsights.com/travel/
View all posts by Nathan →
This entry was posted in Travel, World Trip 2009 and tagged England, London, Stonehenge. Bookmark the permalink.