Early in the day I visited the Anne Frank House.  It felt unreal to be there after reading her diary in High School.  The dark days of the Nazi Regime in Europe. 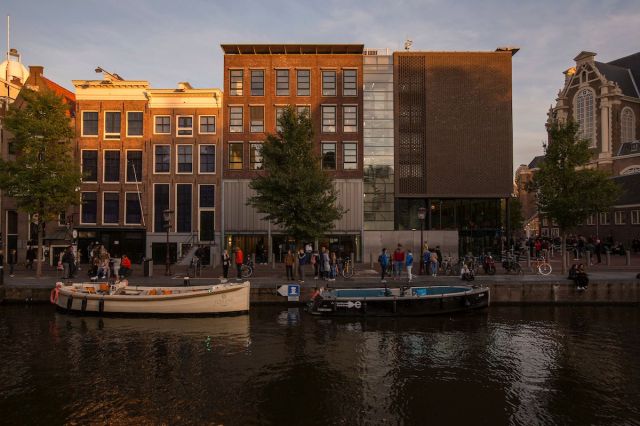 Later in the day I gallantly escorted my travel friend Belinda to the famous Amsterdam Sex Museum which basically shows pictures and objects from the past of an erotica nature, mostly very good fun.   I can tell you the people in 1890 and 1900 did basically the same things we are doing now and that prior to that Kings and Queens had a lot of ‘sexual’ objects made especially for their enjoyment.

We then enjoyed a casual walk around the city, the canals are very good.   Belinda wanted to look in a tattoo place that turned out to be gay (but had women clerks).   The first clue was the naked guys on the DVD covers without any women but only I picked this up.

The Red Light District still operates during the day but does have as many working girls. A group of us was then going to enjoy a local comedy called ‘Boom Chicago’ however a big win by the Amsterdam soccer team Ajax caused it to be cancelled.   I don’t know what they won but the fans were very happy.   We watched a movie at another hostel and when returning to my hostel I saw why riot police were out in force, the place was a mess, imagine if they lost!

A World traveller who has so far experienced 71 countries in this amazing world. https://nathanburgessinsights.com/travel/
View all posts by Nathan →
This entry was posted in Travel, World Trip 2006 and tagged Amsterdam, Holland, Netherlands. Bookmark the permalink.