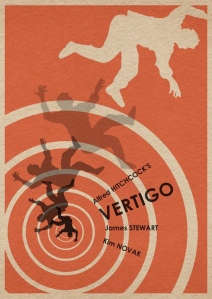 Plot
During a San Francisco rooftop chase, a policeman falls to his death while trying to help detective John “Scottie” Ferguson (James Stewart).  As a result Scottie decides to retire due to fear of heights and vertigo. Scottie tries to conquer his fear, but his best friend and ex-fiancée Midge Wood (Barbara Bel Geddes) says that another severe emotional shock may be the only cure.

An acquaintance from college, Gavin Elster (Tom Helmore), who has returned after disppearing during the war, asks Scottie to follow his wife, Madeleine (Kim Novak), claiming that she is in some sort of danger. Scottie reluctantly agrees, and follows Madeleine to a florist where she buys a bouquet of flowers, then to the Mission San Francisco de Asís and then the grave of one Carlotta Valdes (1831–1857), and finally to the Legion of Honor art museum where she gazes at the Portrait of Carlotta. He watches her enter the McKittrick Hotel, but on investigation she does not seem to be there.

Midge helps Scottie find a local historian who knows a lot of the dark secrets of San Francisco explains that Carlotta Valdes committed suicide: she had been the mistress of a wealthy married man and bore his child; the otherwise childless man kept the child and cast Carlotta aside.

Gavin reveals that Carlotta (who he fears is possessing Madeleine) is Madeleine’s great-grandmother, although Madeleine has no knowledge of this, and does not remember the places she has visited. Scottie tails Madeleine to Fort Point and, when she leaps into the bay, he rescues her.

The next day Scottie follows Madeleine; they meet and spend the day together. They travel to Muir Woods and Cypress Point on 17-Mile Drive, where Madeleine runs down towards the ocean. Scottie grabs her and they embrace. Madeleine recounts a nightmare and Scottie identifies its setting as Mission San Juan Bautista, childhood home of Carlotta. He drives her there and they express their love for each other. Madeleine suddenly runs into the church and up the bell tower. Scottie, halted on the steps by his vertigo can’t get to the top and sees Madeleine plunge to her death.

The death is declared a suicide. Gavin does not fault Scottie, but Scottie breaks down, becoming clinically depressed and ends up in a sanatorium for a time, almost catatonic. Midge vists Scottie and later explains to a Doctor that Scottie loved Madeleine and still does.

After release, Scottie frequents the places that Madeleine visited, often imagining that he sees her. One day, he notices a woman who reminds him of Madeleine, despite her different appearance. Scottie follows her and she identifies herself as Judy Barton, from Salina, Kansas.

A flashback reveals that Judy was the person Scottie knew as “Madeleine Elster”; she was impersonating Gavin’s wife as part of a murder plot. Judy drafts a letter to Scottie explaining her involvement: Gavin had deliberately taken advantage of Scottie’s vertigo to kill his wife by having Judy impersonate Madeline, have Judy climb the tower with Scottie unable to follow, and than Gavin threw his wife who he had already kill from the tower staging an apparent “suicide jump”. But Judy rips up the letter and continues the charade because she loves Scottie.

They begin seeing each other, but Scottie remains obsessed with “Madeleine”, and asks Judy to change her clothes and hair so that she resembles Madeleine. After Judy complies, hoping that they may finally find happiness together, he notices her wearing the necklace portrayed in the painting of Carlotta, and realises the truth, and that Judy had been Elster’s mistress, before being cast aside just as Carlotta was. Scottie insists on driving Judy to the Mission without telling her he knows what happened.

When in the tower  he tells her he must re-enact the event that led to his madness, admitting he now understands that “Madeleine” and Judy are the same person. Scottie forces her up the bell tower and makes her admit her deceit. Scottie reaches the top, finally conquering his vertigo. Judy confesses that Gavin paid her to impersonate a “possessed” Madeleine; Gavin faked the suicide by throwing the body of his wife from the bell tower.

Judy begs Scottie to forgive her because she loves him. He embraces her, but a shadowed figure rises from the trapdoor of the tower, startling Judy, who steps backward and falls to her death. Scottie, bereaved again, stands on the ledge, while the figure, a nun investigating the noise, rings the mission bell.

What’s to Like
The Cinematography, the examination of mental illness, the uses of the dolly zoom to make you feel like you have vertigo.

What’s not to Like
That Gavin, husband of Madeline, apparently gets away with murder when the film abruptly ends.

Thoughts
The film is very circular visiting many of the same locations many times, with Scottie’s obsession with what happened never letting him move on with his life.  When he has Judy start dressing like Madeline, he isn’t doing it before he knows they are the same person he just can’t let Madeline go.

The psychological murder mystery will keep you attention but we once we learn via a flashback what happen the mystery element is removed despite a fair proportion of the film to go.  This leaves us just wondering when Scottie will finally learn the truth.  Ideally the reviel should have been felt for right at the end of the film so we could have felt Scottie’s obsession was making him go mad seeing connections that might not actually be there.  Scottie’s best friend obviously adores him but the detective can’t see how much she wishes to be with him now that they are adults.  This inability to understand Midge’s desire to be with him and the struggles he has during the film does make you wonder how good a detective he really is even if the murder mystery is very well planned.

A classic film worth your time.