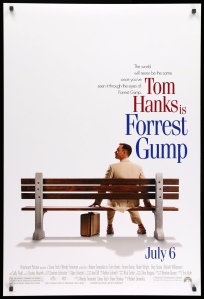 Plot
n 1981 at a bus stop in Savannah, Georgia, a man named Forrest Gump (Tom Hanks) recounts his life story to strangers who sit next to him on a bench.

In 1951 in Greenbow, Alabama, young Forrest (Michael Conner Humphreys) is fitted with leg braces to correct a curved spine, and is unable to walk properly. He lives alone with his mother (Sally Field), who runs a boarding house out of their home that attracts many tenants, including a young Elvis Presley, who plays the guitar for Forrest and incorporates Forrest’s jerky dance movements into his performances. On his first day of school, Forrest meets a young girl named Jenny Curran (Hanna R. Hall), and the two become best friends.

Forrest is often bullied because of his physical disability and marginal intelligence. While fleeing from some bullies, his braces fall off, revealing Forrest to be a very fast runner. This talent eventually allows him to receive a football scholarship at the University of Alabama in 1963; he witnesses Governor George Wallace’s stand in the schoolhouse door, becomes a top running back, is named on the All-American team, and meets President John F. Kennedy at the White House.  During College he continues to visit ‘his girl’ Jenny (Robin Wright) at her girls only college.  On one visit Forrest beats up Jenny’s boyfriend who is thinks is hurting Jenny and later Jenny let’s Forrest touch Jenny’s bare breast having his first sexual experience.

After his college graduation, Forrest enlists into the U.S. Army, where he befriends a fellow soldier nicknamed “Bubba” (Mykelti Williamson), who convinces Forrest to go into the shrimping business with him after their service. In 1967, they are sent to Vietnam, serving with the 9th Infantry Division in the Mekong Delta region. After a few routine operations, their platoon is ambushed while on patrol, and Bubba is killed in action. Forrest saves several wounded platoon-mates—including his lieutenant, Dan Taylor (Gary Sinise), who loses both his legs—and is awarded the Medal of Honour for his heroism by President Lyndon B. Johnson.

At the anti-war “March on the Pentagon” rally, Forrest meets Abbie Hoffman and briefly reunites with Jenny, who has been living a hippie lifestyle. Jenny takes Forrest to a Black Panther meeting where Jenny’s University boyfriend hits her and once again Forrest beats her boyfriend saying he should not treat Jenny like that.  Jenny and Forrest talk all night and he gives her his Medal of Honour saying he only did what she told him to do (run).

Forrest develops a talent for ping-pong, and becomes a sports celebrity as he competes against Chinese teams in ping-pong diplomacy, earning him an interview alongside John Lennon on The Dick Cavett Show. In New York City, he spends the holidays and the 1972 new year with Lieutenant Dan, who has become an embittered cripple. Forrest soon meets President Richard Nixon and is put up in the Watergate complex, where he accidentally exposes the Watergate scandal, forcing Nixon to resign. Forrest Gump is officially discharged from the army after the war ends.

Returning to Greenbow, Forrest endorses a company that makes ping-pong paddles. He uses the earnings to buy a shrimping boat in Bayou La Batre, fulfilling his promise to Bubba. Lieutenant Dan joins Forrest in 1974, and they initially have little success. After their boat becomes the only one to survive Hurricane Carmen, they pull in huge amounts of shrimp and create the Bubba Gump Shrimp Company, after which Lieutenant Dan finally thanks Forrest for saving his life. Lieutenant Dan invests into Apple Computers and the two become millionaires, but Forrest also gives half of the earnings to Bubba’s family, giving them a better life. Forrest then returns home to see his mother as she dies of cancer.

In 1976, Jenny—recovering from years of drugs and abuse returns to visit Forrest, and after a while he proposes to her. That night she tells Forrest she loves him and the two make love, but she leaves the next morning. Heartbroken, Forrest goes running, and spends the next three years in a relentless cross-country marathon, becoming famous again before returning home to Greenbow.

In the present (1981), Forrest reveals that he is waiting at the bus stop because he received a letter from Jenny, who asked him to visit her. The strangers say that the address on the letter is only a few blocks away and Forrest immediately takes off. As Forrest is finally reunited with Jenny, she introduces him to their son, named Forrest Gump, Jr. Jenny tells Forrest she is sick with an unknown incurable virus and the three move back to Greenbow. Jenny and Forrest finally marry, but she dies a year later.

The film ends with Forrest seeing his son off on his first day of school.

What’s to Like
The historical setting, the music and songs, the landscapes, the acting.

Thoughts
A sentimental film with a lot of heart set across very radical decades in USA history for desegregation, to murders of famous people, to Vietnam War, the sex and drugs era, protest movements, and the changing society roles.  The visual effects used to incorporate Tom Hanks into archived footage as stunning and a first to my knowledge and very realistic. The soundtrack features songs reflecting the different periods seen in the film bring back great nostalgia and add greatly to the film.

Forrest is not a smart man but he is honest and loyal and his good nature and innocence stands out in the turbulent times he lives in.  Jenny, a victim of sexual abuse by her father, struggles for meaning across the film finding causes and new experiences that are ultimately bad for her, with the only true good thing in her life Forrest who loves her and will never betray her.  Jenny struggles to accept Forrest’s love and kindness, possibility because of her hard life and all the people who abused and betrayed her.

The film is big on nostalgia but while there is glamour in those times it also shows tragedy, abuse, murder and confusion.  Surprisingly the low IQ Forrest is the best capable of surviving these turbulent times.

Still the period music, the great cinematography make this a sweet and surprising box of chocolates.