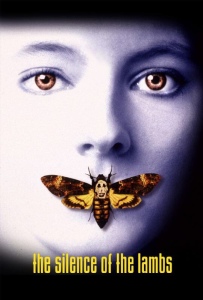 Plot
FBI trainee Clarice Starling (Jodie Foster) is pulled from her training at the FBI Academy at Quantico, Virginia by FBI profiling legend Jack Crawford (Scott Glenn) who head’s the FBI’s Behavioural Science Unit. He assigns Clarice to interview Hannibal Lecter (Anthony Hopkins), a former psychiatrist and incarcerated cannibalistic serial killer, whose insight might prove useful in the pursuit of a psychopath serial killer nicknamed “Buffalo Bill,” who kills young women and then removes the skin from their bodies.

Clarice travels to the Baltimore State Hospital for the Criminally Insane, where she is led by Frederick Chilton (Anthony Heald) to Lecter’s solitary quarters. Although initially pleasant and courteous, Lecter grows impatient with Clarice’s attempts at “dissecting” him and rebuffs her. As she is leaving, a prisoner named Miggs flicks semen at her. Lecter, who considers this act “unspeakably ugly,” calls Clarice back and tells her to seek out an old patient of his. Hannibal manages to talk Miggs into killing himself.

Hannibal’s lead sends Clarice to a storage shed, where she discovers a man’s severed head with a death’s head moth lodged in its throat. She returns to Lecter, who tells her that the man is linked to Buffalo Bill. He offers to profile Buffalo Bill on the condition that he may be transferred away from Chilton, whom he detests.

Buffalo Bill abducts a Senator’s daughter, Catherine Martin (Brooke Smith). Crawford authorises Clarice to offer Lecter a fake deal, promising a prison transfer if he provides information that helps them find Buffalo Bill and rescue Catherine. Instead, Lecter demands a quid pro quo from Clarice, offering clues about Buffalo Bill in exchange for personal information. Clarice tells Lecter about the murder of her father when she was ten years old.

Chilton secretly records the conversation and reveals Starling’s deceit before offering Lecter a deal of Chilton’s own making. Lecter agrees and is flown to Memphis, where he verbally torments Senator Ruth Martin (Diane Baker), and gives her misleading information on Buffalo Bill, including the name “Louis Friend.”

Clarice notices that “Louis Friend” is an anagram of “iron sulfide”—fool’s gold. She visits Lecter, who is now being held in a cage-like cell in a Tennessee courthouse, and asks for the truth. Lecter tells her that all the information she needs is contained in the case file.

Rather than give her the real name, he insists that they continue their quid pro quo and she recounts a traumatic childhood incident where she was awakened by the sound of spring lambs being slaughtered on a relative’s farm in Montana. Clarice admits that she still sometimes wakes thinking she can hear lambs screaming, and Lecter speculates that she is motivated to save Catherine in the hope that it will end the nightmares. Lecter gives her back the case files on Buffalo Bill after their conversation is interrupted by Chilton and the police, who escort her from the building.

Later that evening, Lecter kills his guards, dressing one of them up as Hannibal and throwing the guard into a lift shaft while Hannibal impersonates the guard using his cut off face.  Hannibal escapes from his cell, and disappears.

Clarice analyses Lecter’s annotations to the case files and realises that Buffalo Bill knew his first victim personally. Starling travels to the victim’s hometown and discovers that Buffalo Bill was a tailor, with dresses and dress patterns identical to the patches of skin removed from each of his victims. She telephones Crawford to inform him that Buffalo Bill is trying to form a “woman suit” out of real skin, but Crawford is already en route to make an arrest, having cross-referenced Lecter’s notes with hospital archives and finding an autogynephilic man named Jame Gumb, who once applied unsuccessfully for a sex-change operation, believing himself to be a transsexual.

Clarice is directed to continue interviewing friends of Buffalo Bill’s first victim in Ohio, while Crawford leads an FBI HRT team to Gumb’s address in Illinois. The house in Illinois is empty, and Starling is led to the house of “Jack Gordon,” whom she realises is actually Jame Gumb. Clarice pursues him into his multi-room basement, where she discovers that Catherine is still alive, but trapped in a dry well. After turning off the basement lights, Gumb stalks Clarice in the dark with night-vision goggles, but gives his position away when he cocks his revolver. Starling reacts just in time and fires all of her rounds, killing Gumb.

Some time later, at the FBI Academy graduation party, Clarice receives a phone call from Lecter, who is at an airport in Bimini. He assures her that he does not plan to pursue her and asks her to return the favor, which she says she cannot do. Lecter then hangs up the phone, saying that he is “having an old friend for dinner,” and starts following a newly arrived Chilton before disappearing into the crowd.

What’s to Like
The amazing acting, the psychological intrigue, the intensity of the scenes, the dialogue.

Thoughts
The terrifying Hannibal Lecter is a character who can’t easily forget.  He is quiet, reserved, intelligent and correct in conversation but you sense the monster that is just below the surface and when the monster emerges it is horrifying and methodical.  Hannibal might hate some of his victims but he keeps in control of his actions even when eating someone’s face, he only strikes when the time is right and his intelligence, patience and total lack of morals and lines means he can fatally strike when the moment arises.  The darkest soul of an intelligence monster and someone that you would like to be many thousands of kilometres away from.

Jodie Foster is amazing in this movie.  An actor all her life this was another major relevation up their with her earlier roles in Tax Driver in 1974 (at age 13) playing a underage prostitute and The Accused in 1988.  Anthony Hopkins is equally as great in this movie despite having less scene time then Foster and less lines when he is with any other actor then Foster who steals the entire scene but together they create mesmerising scenes that you can’t look away from even if at times you want to.

I first saw this movie while in High School and at the time it was the best movie I had ever seen as I was pulled into the narrative of the story.  This movie isn’t for the faint hearted but definitely worth watching.