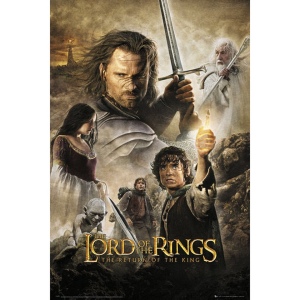 Note: I watched the Four Hour Extended Edition for this review

Plot
The film starts by flahsing back to two Hobbit like individuals, Sméagol and Déagol, who are fishing when Déagol discovers the One Ring in the river. Sméagol is ensnared by the Ring, and kills his friend for it. He retreats into the Misty Mountains as the Ring twists his body and mind, until he becomes the creature Gollum.

Centuries later, during the War of the Ring, Gandalf leads Aragorn, Legolas, Gimli, and King Théoden to Isengard, where they reunite with Merry and Pippin. <Extended edition only> After some dark dialogue between Saruman and Gandaff the dismayed Wormtongue kills Sarumn and is killed by Legolas.  Gandalf retrieves the defeated Saruman’s seeing-stone. Pippin later looks into the seeing-stone and is seen by Sauron. From Pippin’s description of his visions, Gandalf surmises that Sauron will attack Gondor’s capital Minas Tirith. He rides there to warn Gondor’s steward Denethor, taking Pippin with him.

Gollum leads Frodo Baggins and Samwise Gamgee to Minas Morgul, where they watch the Witch-king of Angmar, leader of the nine Nazgûl, lead an army of Orcs towards Gondor. The hobbits begin climbing a stair carved in the cliff face that leads to a secret tunnel into Mordor, unaware that Gollum plans to kill them and take the Ring. The Witch-king and his forces strike and overwhelm Osgiliath, forcing Faramir and his garrison to retreat to Minas Tirith.

Gollum disposes of the Hobbits’ food, blaming Sam. Believing that Sam desires the Ring, Frodo tells him to go home before he and Gollum continue to the tunnel leading to Mordor. Gollum tricks him into venturing into the lair of the giant spider Shelob. Frodo narrowly escapes and confronts Gollum, telling him that he must destroy the Ring for both their sakes. Gollum attacks Frodo but falls down a chasm. Frodo continues on, but Shelob discovers, paralyses, and binds him. Sam returns and injures Shelob, driving her away.  Believing that Frodo is dead he hides when Orcs appear and they take Frodo with them, Sam realises at this point Frodo is alive. The Orcs then fight over ownership of Frodo’s mithril vest, allowing Sam to enter and free Frodo they then escape with continue their journey.

As King Théoden gathers the Rohan army, Aragorn learns from Elrond that Arwen is dying, having refused to leave Middle Earth to be with Aragorn after seeing a vision of their possible future son. Arwen convinced a reluctant Elrond to order the shards of King Elendil’s sword, Narsil, be reforged into Andúril so that Aragorn can reclaim his birthright and gain reinforcements from the ghostly Dead Men of Dunharrow. Joined by Legolas and Gimli, Aragorn travels to the Dead Men’s lair, pledging to release them from Isildur’s undead curse should they come to Gondor’s aid.

Faramir is gravely wounded after a futile effort to recapture Osgiliath the last barrier city before Minas Tirith; believing his son to be dead, Denethor falls into madness. Gandalf is left to defend the city against the Orc army, led by Gothmog. As Gothmog’s army forces its way into the city, Denethor attempts to kill himself and Faramir on a pyre. Pippin alerts Gandalf and they save Faramir, but a burning Denethor leaps to his death from the top of Minas Tirith just before Théoden and his nephew, Éomer, arrive with the Rohan riders.

During the ensuing battle while they are very successful in beating the Orcs they are then overwhelmed by the Oliphaunt-riding Haradrim, while the Witch-King mortally wounds Théoden. Though Théoden’s niece Éowyn kills the Witch-king with Merry’s help, Théoden dies. Aragorn arrives with the Army of the Dead, who overcome Sauron’s forces and win the battle; Aragorn then frees the Dead Men from their curse.

Aragorn decides to march upon the Black Gate as a distraction so Frodo and Sam can reach Mount Doom. Aragorn’s army draws out Sauron’s remaining forces and empties Mordor, allowing Frodo and Sam to reach the volcano, Sam carries a weakened Frodo who’s mind has been posioned by the ring up the mouinatin.

Gollum attacks them just as they reach the entry point to the lava caves of Mount Doom. As Frodo stands on the ledge over the volcanic fire, he finally succumbs to the Ring and claims it as his own, putting it on his finger. Despite Frodo being invisible, Gollum manages to find and attack him, biting his finger off to reclaim the Ring. Frodo fights back, and as they struggle for the Ring both fall off the ledge. Gollum falls into the lava with the Ring happy to have the ring but dies. Frodo clings to the side of the ledge, and Sam rescues him as the Ring disintegrates in the lava. As Frodo and Sam escape, Sauron is destroyed—along with his Orcs and Nazgûl—as Mordor crumbles.

Gandalf flies in with eagles to rescue the Hobbits, who awaken in Minas Tirith and are reunited with the surviving Fellowship. Aragorn is crowned King of Gondor and takes Arwen as his queen. The Hobbits go to bow to the King but Aragorn says they bow to no one and the enture city bows to them.

The Hobbits return home to the Shire, where Sam marries Rosie Cotton. A few years later, Frodo departs Middle-earth for the Undying Lands with his uncle Bilbo, Gandalf, and the Elves. He leaves Sam the Red Book of Westmarch, which details their adventures. Sam returns to the Shire, where he embraces Rosie and their children. remaining forces

What’s to Like
The story, the friendships, the battles, the landscapes, the uplifting music, and the cinematography.

What’s not to Like
Nothing, although some people would have liked stronger editing to reduce the runtime.

Thoughts
The last film in the trilogy of the greatest fantasy story ever filmed The Return of the King won 11 Academy Awards which were reflective of the entire series of this epic masterpiece.  It’s still hard to believe they actually filmed these books back to back to back and managed to convinced such a strong cast to sign on for so long and move to New Zealand, which is almost as far away from home for the main cast as you can get.  The New Zealand landscape is a major start of this series and this film, I’ve even made my way to Hobbiton myself.

The Return of the King is extremely ambitious in scope.  The extended edition wraps up all story points left from the first two films in particular Saruman and Wormtongue’s fates.  The entire series is about individuals who are not expected to do anything (the small Hobbit’s and in this film women) and achieve amazing feats.  It’s about friendship, and it’s about the natural world versus industrialisation represented by the mass created Orcs.

In many ways I feel that Samwise is the real hero of the series and this film.  Frodo is amazing but he would had got nowhere without Samwise’s unselfish devotion literally carrying Frodo up Mount Doom.  Samwise is also the only character who isn’t really effected by the Ring, even Gandalf dare not touch it while Gimli and Legolas never really got close to the Ring or held it like Samwise.  I also loved the character of Éowyn (Miranda Otto) someone who won’t stay in a cage and just wants to stand with those that she loves and will do anything to protect her uncle and Rohan ruler Théoden.

The actors performances are first rate, the growing friendship between Gimli and Legolas, dwarf and elf, feels intensively strong in this film despite Dwarfs never getting along with Elves.  The sound, visuals and art are on a rare scale.  The battles are brilliant.

Some people have issue with how the film goes on are the defeat of Sauron but the writer and this film’s director wanted to show the cost of what they characters achieved.  Middle Earth and the Shire is saved but some like Froddo, Gandalf and all the Elves can’t go back to their old lives, they need to move on and make way for the age of man.  They fought evil, touched evil and beat evil and it might they no longer had a place in the innocence that is necessary to really enjoy life.  The film goes from the big set pieces to the small intimate farewell as the Hobbits have to say goodbye to Bilbo Baggins and Froddo, the bonds are so strong but must be farewelled.

A lot of people don’t like fantasy films but the success of the Lord of the Rings series showed the good films are good films and this series reached far belong the core group who loves this genre.  Each ‘normal’ edition of the three films is long, the extended editions are even longer but it’s worthwhile to at least watch this series just once.