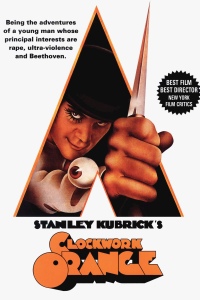 Plot
In a futuristic dystopia  Britain, Alex DeLarge (Malcolm McDowell) is the leader of a gang of delinquents; Georgie (James Marcus), Dim (Warren Clarke) and Pete. One night, after getting intoxicated on drugs they engage in an evening of “ultra-violence”, which includes a fight with a rival gang, who were about to rape a women, and bashing a elderly vagrant. They then drive to the country home of writer F. Alexander (Patrick Magee) and beat him to the point of crippling him for life. Alex then rapes Alexander’s wife while happily singing “Singin’ in the Rain”.

The next day, while truant from school, Alex is approached by his probation officer Deltoid who is aware of Alex’s activities even if he does have the proof.  Alex picks up two girls and has sex with them that afternoon.

Alex’s gang express discontent with the petty crime and want more equality and high-yield thefts, but Alex asserts his authority by attacking them while walking along a river. Later, Alex invades the home of a wealthy “cat-lady” (Miriam Karlin) and bludgeons her with a phallic sculpture while his gang remain outside waiting to come in. On hearing sirens, Alex tries to flee but Dim smashes a bottle in his face, stunning him and leaving him to be arrested. With Alex in custody, Deltoid gloats that the cat-lady died, making Alex a murderer. He is sentenced to fourteen years in prison.

Two years into the sentence, Alex eagerly takes up an offer to be a test subject for the Minister of the Interior’s new Ludovico technique, an experimental aversion therapy for rehabilitating criminals within two weeks. Alex is strapped to a chair, his eyes are clamped open and he is injected with drugs. He is then forced to watch films of sex and violence, some of which are accompanied by the music of his favourite composer, Ludwig van Beethoven. Alex becomes nauseated by the films and, fearing the technique will make him sick upon hearing Beethoven, begs for an end to the treatment.

Two weeks later, the Minister demonstrates Alex’s rehabilitation to a gathering of officials. Alex is unable to fight back against an actor who taunts and attacks him and becomes ill wanting sex with a topless woman. The prison chaplain complains that Alex has been robbed of his free will; the Minister asserts that the Ludovico technique will cut crime and alleviate crowding in prisons.

Alex is let out as a free man, only to find that the police have sold his possessions as compensation to his victims and his parents have let out his room to a man who despise Alex and acts more like a son to Alex’s parent than Alex ever did.

With nowhere to live Alex wonders around but then encounters the elderly vagrant whom he attacked years earlier, and the vagrant and his friends attack him. Alex is saved by two policemen but is shocked to find they are his former friends Dim and Georgie. They drive him to the countryside, beat him up, and nearly drown him before abandoning him. Alex barely makes it to the doorstep of a nearby home before collapsing.

Alex wakes up to find himself in the home of Alexander, where he is being cared for by Alexander’s new helper Julian. Alexander does not recognise Alex from the previous attack but knows of Alex and the Ludovico technique from the newspapers. He sees Alex as a political weapon and prepares to present him to his colleagues. While bathing, Alex breaks into “Singin’ in the Rain”, causing Alexander to realise that Alex was the person who assaulted him and his wife who later died. With help from his colleagues, Alexander drugs Alex and locks him in an upstairs bedroom. He then plays Beethoven’s Ninth Symphony loudly from the floor below. Unable to withstand the sickening pain, Alex attempts suicide by throwing himself out the window.

Alex wakes up in a hospital with broken bones. While being given a series of psychological tests, he finds that he no longer has aversions to violence and sex. The Minister, who is under immense ppolitical pressure over Alex’s suicide attempt, arrives and apologises to Alex. He offers to take care of Alex and get him a job in return for his co-operation with his election campaign and public relations counter-offensive. As a sign of good will, he says he has imprisoned Mr Alexander and the Minister brings in a stereo system playing Beethoven’s Ninth. Alex then contemplates violence and has vivid thoughts of having sex with a woman in front of an approving crowd, and thinks to himself, “I was cured, all right!”

What’s to Like
The high concepts in particular how should we treat and rehabilitate violent offenders; should it be with more violence and control?

What’s not to Like
The multiple sexual assaults go on for a long time, longer then needed and could have been done more outside of the movie frame to still convey the same message.

Thoughts
While this movie has significant depravity, violence and sexual assault it is still somehow high concept.  In the first half of the movie you see Alex as an maladjusted individual who cares only of himself and his more pleasures through violence and sex.  But in the second half of the movie you see him as a victim of the state and others with agendas, despite this you can’t feel too bad for him just that those abusing him are not much better.

The movie askes several interesting questions of “Are you a better man if you had no choice but to behave?”, “is State based violence fair and justified?”, “Are you really much better than someone just because you have title or position of power?”.  There aren’t really black or white answers either.  The movie is very dark in it’s betrayal of basic human nature.  There is definitely an anti-government message to be found as the Minister pushing the treatment never consider ethical issues and only uses his position of power to advance himself, never taking responsibility but blaming others and using the outcomes to silence and imprison a political voice against his Government.

It’s not a future you’d want to live in but on some level a lot of this violence does occur around the world and closer to people then they probably know.  The multiple sexual assaults and female nudity go beyond what was really necessary even if some was necessary for the depravity the movie was displaying but you can go a little to far and sometimes framing some of this material outside of the frame can be better.  Still I understand why this can be viewed as one of Stanley Kubrick’s masterpieces.