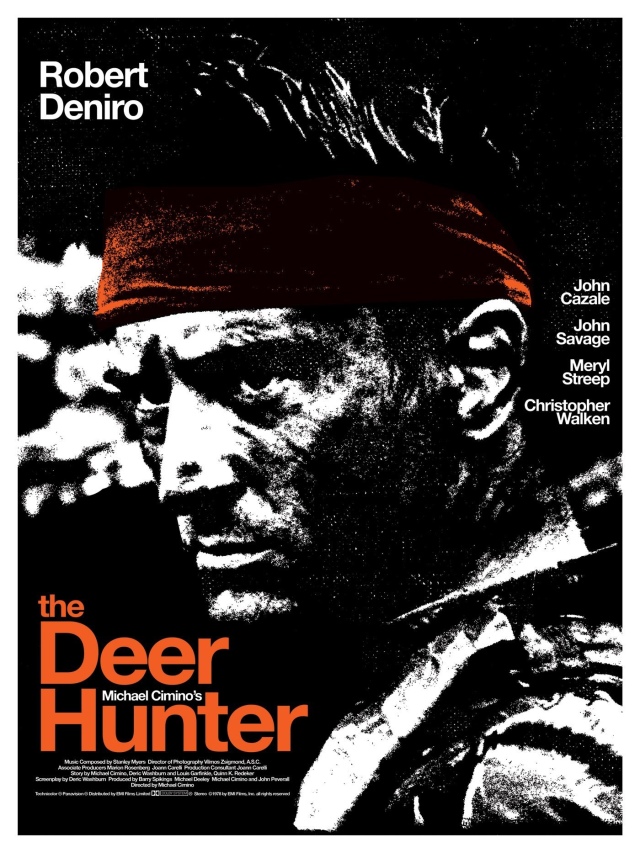 Synopsis
Three friends in Pennsylvania – Mike (Robert De Niro), Nick (Christopher Walken) and Steven (John Savage) are finishing work at the local steel mill on the day of Steven’s wedding and just before deploying to Vietnam.  Steven is engaged to Angela, who is secretly pregnant. Mike and Nick both love Linda (Meryl Streep), who after getting a beating from her alcoholic father askes Nick if she can moved into the place he shares with Mike. Before the wedding the friends go to a local bar having a lot of fun.

During Steven and Angela’s wedding, Nick asks for Linda’s hand, and she accepts. As the newlyweds drive away, Nick asks Mike to not leave him in Vietnam which he promises he will not. Mike and Nick and their friends then go on a final deer hunt although Mike only likes hunting with Nick. Mike kills a deer with a single shot.

The movie than jumps forward in time and location.  In Vietnam Mike, Nick and Steven cross paths on the battle field but are captured by the Viet Cong along with some other soldiers.  While prisoners they are forced to participate in a torturous game of Russian roulette while the jailers place bets. Steven yields to fear and exhaustion and fires his round at the ceiling. As punishment for breaking the rules, Steven is thrown into a cage that is immersed in a river filled with rats and dead bodies, it’s a death sentence. Mike convinces Nick to attempt an escape by inserting three rounds into the revolver’s cylinder; after convincing their tormentors with the increased risk, and firing the gun which luckily was empty for those turns, Mike knowing the gun chamber is now likely full shoots and kills his captors and helps Nick and Steven escape.

The three float along the river’s current on a tree trunk. When they reach a suspension bridge, they are rescued by an American helicopter, but Steven is weak and falls into the water. Mike immediately jumps in to save Steven, while Nick is held by the aircraft crew. Steven’s legs are broken in the fall, and Mike carries him until they meet a caravan of soldiers fleeing to Saigon. Nick is admitted to a military hospital for physical and psychological trauma, and he ventures to Saigon after he is discharged. In his wandering, he hears gunshots emanating from a gambling den and attempts to leave, reminded of his previous torture experience. However a French businessman persuades him to come inside and play for him. Mike is present in the den and recognizes Nick, but is unsuccessful in getting his attention when Nick runs away.

Mike is repatriated and he has difficulty reintegrating into civilian life. He fails to appear at a party organised by his friends. He meets Linda the next morning and they discuss how Nick has deserted. Mike then visits Angela, who is now the mother of a child, but has slipped into catatonia following the return of Steven, who has been rendered an invalid with the lose of his legs. Those within Mike’s circle who stayed at home seem to understand nothing of war, and the following days force Mike to go on another deer hunt but this time Mike is unable to shoot a deer.  Later Mick’s friend Stan, jokingly threatens another partner with a gun which greatly upsets Mike. Mike violently slaps the gun out of Stan’s hand, leaves only one round in the cylinder, points the gun at Stan’s forehead and pulls the trigger on an empty chamber scaring everyone.

Mike visits Steven at a veterans’ facility.  Steven tells Mike that he has been regularly receiving large sums of money from Vietnam. Mike senses that Nick is the source of these payments, he returns to Vietnam in search of Nick. Wandering around Saigon, now in a state of chaos, Mike finds the French businessman and persuades him to take him to the gambling den. Mike finds himself facing Nick, who has become a professional in the macabre game of Russian roulette and is so far gone he fails to recognise Mike. Mike attempts to bring Nick back to reason, but Nick, blinded by his profound suffering from when he was captured and tortured, is indifferent. During the Russian roulette game, Mike evokes memories of their hunting trips. Nick recalls Mike’s “one shot” method and smiles before pulling the trigger and killing himself and devastating Mike.

Mike and his friends attend Nick’s funeral, and the atmosphere at their local bar is dim and silent. Moved by emotion, the patrons sing “God Bless America” in honor of Nick.

What’s to Like
The amazing acting, the strong and involved story, the horrors of war.

What’s not to Like
They could have edited down the first hour a little which goes on a little too long.

Thoughts
They don’t make movies like this anymore with the slow pace and many major tone shifts.  The script takes it time developing the three leads; Mike the cool headed hunter, Nick the gambler, and Steven the settler.  Mike’s cool head allows he to determine a way that gives everyone a small chance to escape capture.  Nick can’t handle his Russian roulette experience and in the ends falls into gambling to reconcile how he somehow survived. Steven is physically and mentally broken by the experience but has a small chance to recover with his friends and especially Mike by his side.

The movie is in three parts, the first is the hopeful and free spirited friends, the second is the horror of war, and the third is attempting to return to normal life but failing.

The second part, the horrors of the Vietnam war, while relatively short will stay with you long after the movie finishes, the brutally never ends, the lack of humanity and the depths that people stoop to is sadly too realistic.

There are three amazing actors in this movie with Robert De Niro and Christopher Walken at the absolute top of their careers and Meryl Streep in her first major role does a lot with what time she is given.

I’m so glad I finally watched this amazing movie especially after seeing some many other movies and TV show parody some of the most memorable scenes.