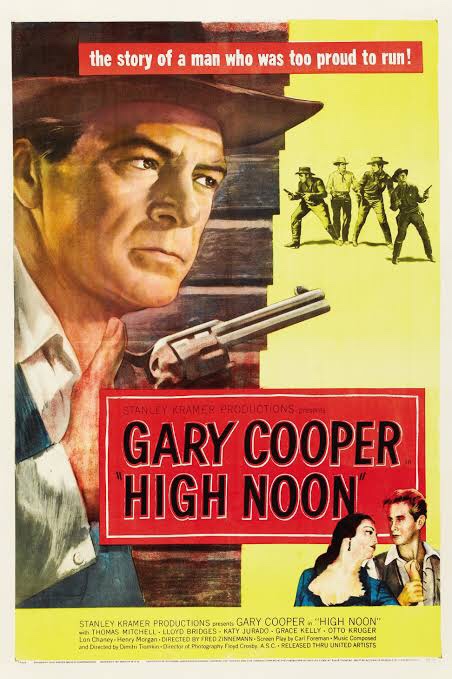 Synopsis
The movie starts with three men gathering outside the town of Hadleyville, a small town in New Mexico Territory. They ride into town and up to the train station getting confirmation that the noon train is on time.

In town Marshal Will Kane (Gary Cooper) gets married to Amy Fowler (Grace Kelly) and then retires. The couple is about to depart for a new life to raise a family and run a store in another town however word arrives that Frank Miller (Ian MacDonald), a vicious outlaw that Kane previously sent to jail, has been released and will arrive on the noon train.

Miller’s gang where the men we see at the start of the film, they are Miller’s younger brother Ben, Jack Colby, and Jim Pierce. When put away Miller made it clear he will get his revenge.

Kane’s new wife Amy is a devout Quaker and therefore a pacifist and after Kane decides to not leave the town she insists that they do and says she will leave Kane if he does go. However Kane’s sense of duty and honour are strong and he can’t leave. Besides Kane reasons that Miller and his gang will hunt him down anyway.

Amy decides she is leaving on the noon train but seeing Miller’s gang at the station decides to wait at the hotel instead. At the hotel she meets Helen Ramírez (Katy Jurado), who was once Miller’s lover, and then Kane’s, and is leaving as well. Amy understands why Helen is fleeing, but the reverse is not true: Helen tells Amy that if Kane were her man, she would not abandon him in his hour of need.

Kane’s efforts to round up a posse at the tavern, and then the church, are met with fear and hostility. Some townspeople, worried that a gunfight would damage the town’s reputation, urge Kane to avoid the confrontation entirely. Others are Miller’s friends, and resent that Kane cleaned up the town in the first place.

Kane’s young deputy Harvey Pell (Lloyd Bridges), who is bitter that Kane did not recommend him as his successor, says he will only stand with Kane if Kane ensures he becomes the next Marshall but Kane can’t agree to this as his successor is arriving tomorrow and he doesn’t think Pell is ready to be Marshall.

Kane visits a series of old friends and allies, but none can or will help: his predecessor, Marshal Howe is old and arthritic; Judge Percy Mettrick, who sentenced Miller, flees on horseback, Herb Baker agrees to be deputised, but backs out when he realizes he is the only volunteer; Sam Fuller hides in his house, sending his wife to the door to tell Kane he is not home. Jimmy offers to help Will, but he is vision impaired, drunk and likely to get himself killed; Kane sends him home for his own safety. The other offer of aid comes from a fourteen-year-old boy; Kane admires his courage but rejects it as well.

At the stables, Pell saddles a horse and tries to persuade Kane to take it and leave town. This causes an argument, and then a fist fight. Kane finally knocks his former deputy out and returns to his office to write out his will as the clock ticks toward high noon. He then goes into the street to face Miller and his gang alone.

The gunfight begins. Kane guns down Ben Miller and Colby by running and hiding in buildings and stables, but is wounded in the process. As the train is about to leave the station, Amy hears the gunfire and runs back to town. Despite her religious beliefs Amy shoots Pierce from behind to save her husband. This leaves Frank Miller, who grabs Amy as a shield to force Kane into the open. Amy claws Miller’s face and he pushes her to the ground, giving Kane a clear shot, and he shoots Miller dead.

Kane helps his bride to her feet and they embrace. As the townspeople emerge and cluster around him, Kane throws his marshal’s star in the dirt and likely disgusted departs with Amy on their wagon immediately.

What’s to Like
The superb acting, the music, having the movie play out in real time.

Thoughts
This movie could be seen as a great fusion of story and character to create amazing suspense. Unlike most westerns it doesn’t have a lot of action until the last 10 minutes. What you get instead is an increasingly desperate Marshall Kane finding that his friends and the towns people don’t really have his back. When you see Kane writing his will we understand that Kane believes he will soon die alone with his wife and friends having abandoned him, but it turns out Kane will survive because his wife loves him enough to forsake her pacifist beliefs.

The film shows that the happy endings shown in most westerns are not the end of the story and that outlaws can come back at any time, so this film is really like a sequel to an unseen film. That most of the locals of the town who benefited from the Marshall decide they’d rather be kicked around by Miller than risk being shot dead is sad but not surprising.

A very enjoyable movie that is very different to similar movies of the time especially giving two women a major role in the film and AMy Kane move personal agency in setting up and killing one of the men trying to kill her husband.