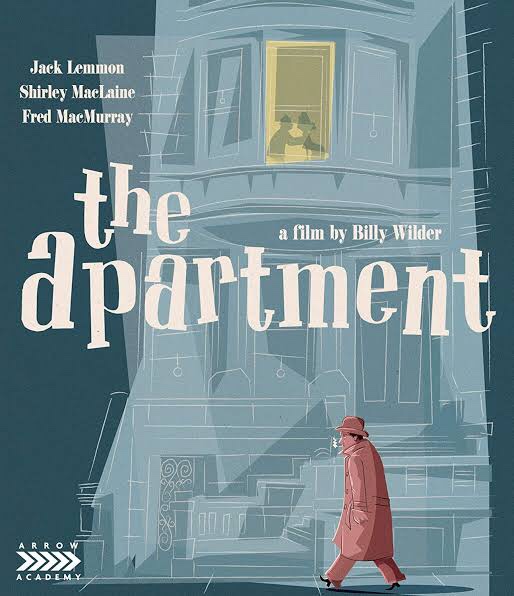 Plot
C.C. “Bud” Baxter (Jack Lemmon), is a lonely office worker who wishes to be promoted out of the office pool in the national insurance company he works for in New York City. To that end Bud has been allowing four executives to use his apartment for secret rendezvous with their respective mistresses. These executives promise to write glowing reports about Bud, which they eventually do but don’t actively support his promotion as they are more interested in their extramarital affairs.

Their indifference to Bud’s concerns means he often ends up stuck outside his apartment occasionally even sleeping outside in the cold. Bud’s neighbours hear the rendezvous and assume he is sleeping with multiple woman across the week living a playboy lifestyle that his next door neighbour Dr. Dreyfuss (Jack Kruschen) Bud will lead him to an early grave.

The personnel director, Jeff Sheldrake (Fred MacMurray) eventually uncovers the rouse, but instead of punishing Bud he bullies Bud into letting him use the apartment for his own extra-marital affair. The affair is with the company’s elevator operator, Fran Kubelik (Shirley MacLaine) who Bud has a crush on but he doesn’t find out about her relationship with Sheldrake until later.

Weeks, or months later, at the company’s Christmas party, Fran learns that she is just latest addition to the list of women that Sheldrake has been involved with from Miss Olsen (Edie Adams), Sheldrake’s secretary and former fling. Additionally at the same party, Bud learns that Fran is Sheldrake’s mistress, crushing his hopes for a relationship with her and making him bitter.

The consequences of these relevations sees Fran attempt suicide with sleeping pills while in Bud’s apartment while at the same time he picks up a married woman and takes her back to his apartment only to find the unresponsive Fran. Immediately getting rid of the woman he picked up he rushes next door to get Dr Dereyfuss who helps Fran recover by getting her to vomit, slapping her several times, getting her to drink a lot of coffee and forcing her to stay awake by marching her around the apartment.

Fran spends the next two days, including Christmas, at the apartment recuperating and they start a game of gin rummy. The two talk about their lives and loves. Eventually, Fran’s brother in law tracks her down at the apartment thanks to information from the executives who no longer get to use Bud’s apartment for their affairs. Believing the worst of Bud, the brother in law punches him out. Fran thanks Bud for protecting her, and kisses him goodbye.

A few days later at the office, Sheldrake thanks Bud for protecting him, and rewards him with a promotion to his assistant. Sheldrake fires Miss Olsen for telling Fran about his past. Miss Olsen retaliates by telling Sheldrake’s wife about his affairs, who then responds by kicking him out of the family home. Now free from his marriage, Sheldrake attempts to resume his relationship with Fran but still wishes to live the life of a bachelor.

Sheldrake attempts to bully Bud for the key to the apartment for a rendezvous with Fran but Bud refuses and resigns rather than give into his boss’ demands. He returns home to start packing his apartment wanting a break from the past. That night at the New Year’s Eve party, Sheldrake incredulously informs Fran that Bud refuse to provide a key for the apartment to continue his affair with her.

Fran finally has had enough of Sheldrake and realises Bud actually cares for her, saved her life and got punished in the face for her. Running to the apartment Fran insists on finishing their gin rummy game that they started during her weekend recovery over Christmas. When Bud tells her that he loves her, she jokingly replies “Shut up and deal.” ending the movie.

What’s to Like
A movie ahead of it’s time in it’s depiction of adultery and having the ‘hero’ be someone who can be bullied and allows this adulterous behaviour to occur but he does eventually stand up for himself.

What’s not to Like
Fran is played as an intelligent woman but continues to allow herself to be mislead by Sheldrake even after she knows of his lies to the multiple woman before her.  Being mislead before Miss Olsen lays out the lies is one thing, but going back to him after a suicide attempt is hard to understand for an intelligent person.

Thoughts
This was the last black and white movie to win an academy award in this era for good reason.  It’s a very unusual movie for it’s time showing corporate America unfavourably and multiple unhappy marriages and adulterous men.

The movie is billed as a comedy but I didn’t find it very funny but the insights into how people use each other was fascinating to watch.