This was the second of two flights included with the G Adventures Classic Colombia tour. This was a short flight schedule for 1 hour 3 minutes it turned out to be even less.

Airport Check In
Our tour group was allowed to check in at the Business Class counters but we originally lined up in the very lengthy economy lines. Immediately after being handed my boarding pass I realised my wallet was missing, I know I had this when exiting the private bus at the airport so some how this got lost or stolen in 30-35 minutes until I checked in, not a great experience and a reminder to me to pay extra attention in all crowded spaces.

Security was fairly easy, you show you ticket and id (passport for me) and you move to the security scan. You can keep your shoes on and you just need to take out laptops and tablets.

Lounges
With no Avianca or Star Alliance status and travelling in economy I had no access to Avianca’s Sala VIP (or VIP Lounge) and I’m not even sure there is one at this airport.

Boarding
We boarded from Gate 5. Our group was given Group D priority which is the last group however the flight was only about 70% full.

We did board fairly late due to the late inbound flight before us.

The Seat
The Avianca A320-100 Economy Class seats are arranged in a 3-3 configuration. Economy seats are 17.8 inches wide and have 31 inches of legroom.

As I was in an exit row seat I had a significantly increased legroom. 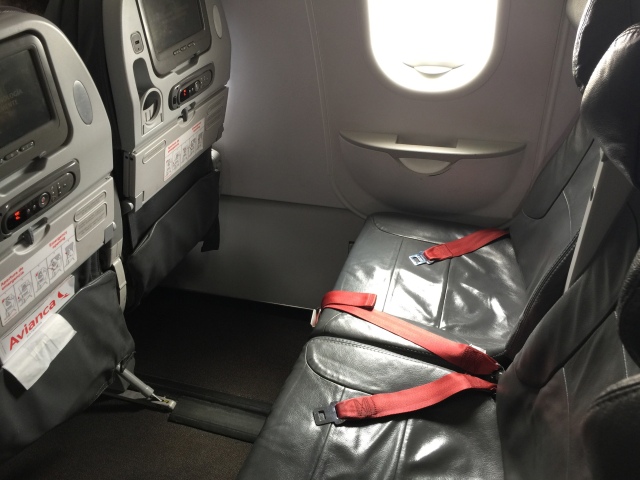 Amenity Kit
There is no amenity kit on this domestic flight.

Meals
There is no meals on this short flight but Avianca did offer coffee, water or a juice (which I choose).

Service
Flight attendants didn’t have very much to do however as I was sitting in exit row I was given instructions on my duties.

Entertainment System
There was a small video touch screen in the back of the seat in front of me however for this short flight I didn’t use it.

Arrival
We departed the plane by stairwell from the front of the plane. The priority bags were already coming out when will fit to the carousel. It took another 10 minutes for my bag to show up which was one of the last ones. 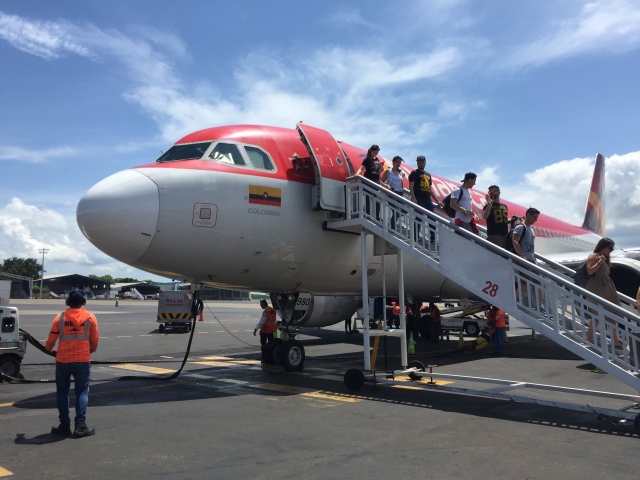 Being a domestic flight there was no security to clear other than you couldn’t return to the tarmac once you had your bag.

Summary
A very simple and short flight, nothing special but also nothing wrong. Getting allocated an exit row seat without asking or paying was a nice bonus.

A World traveller who has so far experienced 71 countries in this amazing world. https://nathanburgessinsights.com/travel/
View all posts by Nathan →
This entry was posted in Flight Reviews, Travel, World Trip 2019 and tagged AA9386, Avianca. Bookmark the permalink.