This was the third (and last) flight to get to Bogotá, Colombia, having started with a domestic positioning flight Melbourne to Sydney almost 40 hours ago, followed by an international flight Sydney to Dallas. Due to the delay in the Qantas flight to Dallas I overnighted at Hyatt Regency DFW and took this flight 1 day later than planned.

Airport Check In
The hotel courtesy shuttle dropped my off at Terminal A and I checked in as the far right of this terminal with almost no one present at 14.00. Check in for my flight was allow outside of the now 3 hour before flying check in window.

Security turned out to be a pain as I left my kindle in my daypack and was sent for a more through bag check and had to wait 15 minutes for other passengers additional checks to be completed.

Dallas Terminal A has a mixture of domestic and international flights, so not separated. There are a host of shops and eateries in the general area of the lounge.

Lounges
While I was travelling in economy to Bogotá on an award flight I had access to American Airlines’ Dallas Admirals Club which is located opposite Gate A23 a 5 minute walk from my eventual departure Gate A38. See review here. 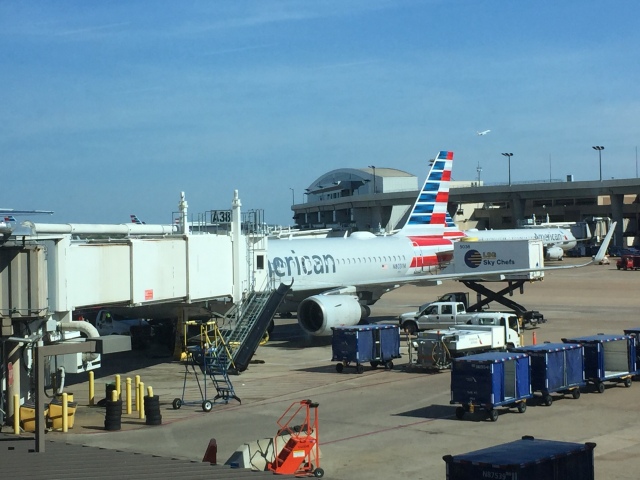 Boarding
We boarded from Gate A38 using prioirty boarding. As Qantas is currently listing me as a Oneworld Emerald member I was in Priority Boarding Group 2. Priority boarding does work well in USA. While boarding US Border Protection Agents escorted two passengers onto the plane, I’m assuming they were being deported.

The Seat
The American Airlines A319 Economy Class seats are arranged in a 3-3 configuration. The standard economy seats are 17.7 inches wide and have 30 inches of legroom.

American Airlines also has a economy class called Main Cabin Extra were the seats are 17.7 inches wide and have 34 inches of legroom. Main Cabin Extra is in rows 8 to 10 and as a Qantas Gold Member / Oneworld Sapphire or above you get access to the ‘Extra’ rows and the extra leg room which was very nice to have.

The seat included a Seat Back Entertainment Screen.

Amenity Kit
No amenity kit was provided in economy on this flight. You are provided with a pillow and a light blanket.

Meals
In economy class you are not offered any drinks before departure.

The meal (dinner) choices were either a chicken or vegetable wrap. This came with Kettle Cooked Chips (Original Favour), Brookie Bar (combination of a fudge brownie and chocolate chip cookie) and one drink (Coca Cola for me).

There was a later second drink service (soft drink, juices, water or coffee) 3 hours 15 minutes into the flight or roughly 1 hour 45 minutes out from Bogotá.

Service
Service was prompt. Flight attendants spoke both English and Spanish and they handle several issues (mostly relating to trying to find spots for baggage carry on storage) well.

Entertainment System
Each seat has a small touch screen to access the entertainment system. There was also wifi that allowed you to stream Apple Music but not the general internet. I watched the teen romantic film ‘Six Feet Apart’ which was actually very good. I also liked the various music channels which played a variety of artists. 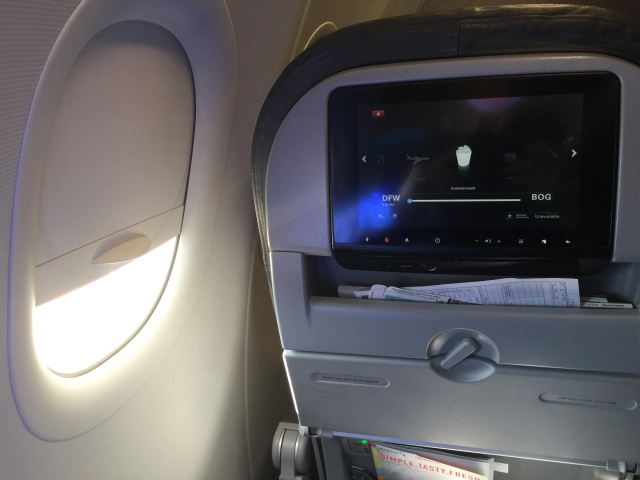 The Flight
The flight used bilingual announcements and safety video (English & Spanish). We flew at 36,000 feet for most of the flight with only a little turbulence for a few minutes. While flying over the Caribbean Sea I was dreaming of taking a cruise in this area one day.

Arrival
We landed a little early at 23.02 and headed off the Immigration. Being in a forward seat I was one of the first people in line and by 23.16 I had cleared Immigration as was in Colombia for the first time. My bag was tag as priority and was one of the first out at 23.41 and a few minutes later I was landslide looking for my organised transfer to the tour hotel, unfortunately the driver never showed.

Summary
This was a very nice medium range flight. The meal was filling and there were two drink services (one with the main meal). The entertainment system offer was very good to make 5+ hours go by and the extra pitch on these Main Cabin Extra seats was very good.

A World traveller who has so far experienced 71 countries in this amazing world. https://nathanburgessinsights.com/travel/
View all posts by Nathan →
This entry was posted in Flight Reviews, Travel, World Trip 2019 and tagged AA1123, American Airlines. Bookmark the permalink.