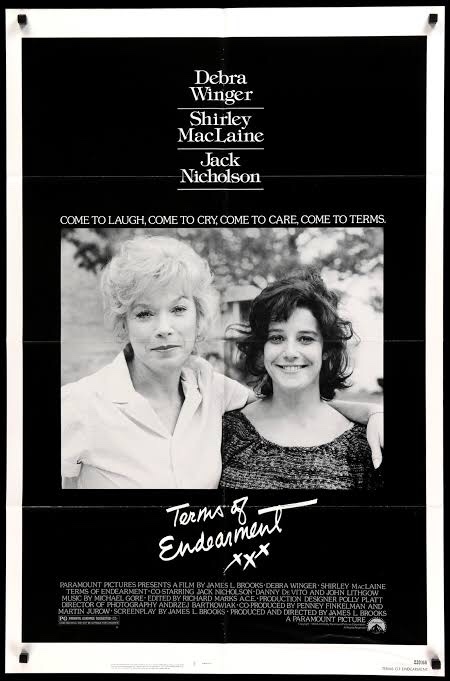 Synopsis
Focusing on a mother-daughter relationship between daughter Emma (Debra Winger) and her mother Aurora Greenway (Shirley MacLaine) who is incredibly protective and whose whole existence seems to center around making sure Emma does what’s best for her, whether she likes it or not. They fight over everything from cooking to relationships to raising children over the course of many years that the movie spans.

The first major disagreement in their lives is when Emma marries English teacher Flap Horton (Jeff Daniels) against her mother’s wishes. Emma and Flap soon run into financial and marital difficulties. Emma has trouble managing the children and household, and she and Flap both have extramarital affairs. Emma relies increasingly on her mother for emotional support.

Meanwhile Aurora has several potential suitors court her during the movie but ends up having a relationship with her new next-door neighbor, a retired astronaut and now playboy Garrett Breedlove (Jack Nicholson) who is in many ways her opposite.

Emma is eventually diagnosed with cancer, which becomes terminal. Aurora stays by Emma’s side through her treatment and hospitalization, even while dealing with her own pain after Garrett suddenly ends their relationship. The dying Emma shows her love for her mother by entrusting her own children to Aurora’s care and not her ex-husband asking for Flap to respect her decision. After Emma’s death, Garrett re-appears in the family’s life, and begins to bond with Emma’s young children.

What’s to Like
How offbeat and unpredictable the plot is, the exceptional performances by all three leads (Debra Winger deserved more than a Academy Award nomination) and the amazing support cast, the balance between the funny and the dramatic, the bittersweet melodrama.

Thoughts
The first two thirds of the movie follows a semi-comic story resolving around relationships, however at this point the movie abruptly shifts pace to an amazing melodramatic tearjerker when Emma discovers that she has cancer.

The first two thirds of the movie gets us to invest in the characters and their lives which is what really pulls you in to the devastating ending with Emma’s death.

You feel the emotion of those last 15 minutes. Flap’s helplessness in the situation and realising how poor a husband he was and how poor a father is currently is, Aurora’s severe distress of having to witness her daughter’s last days, Emma’s children not being able to accept what is occurring.

Life ends for us all unfortunately. That doesn’t mean that the ending is the whole story, if we are lucky it’s the journey with all it’s ups and downs that makes it worthwhile. Emma had many good and bad times but her relationship with her mother stood and ultimately she had a positive impact on those who interacted with her, especially with the many small struggles along the way and her friendships.

With eleven academy nominations and five wins this clearly shows an exceptional movie. Balancing comic and tragedy so well is almost impossible to do and still leave an audience satisfied but Director James L. Brooks pulls this off.