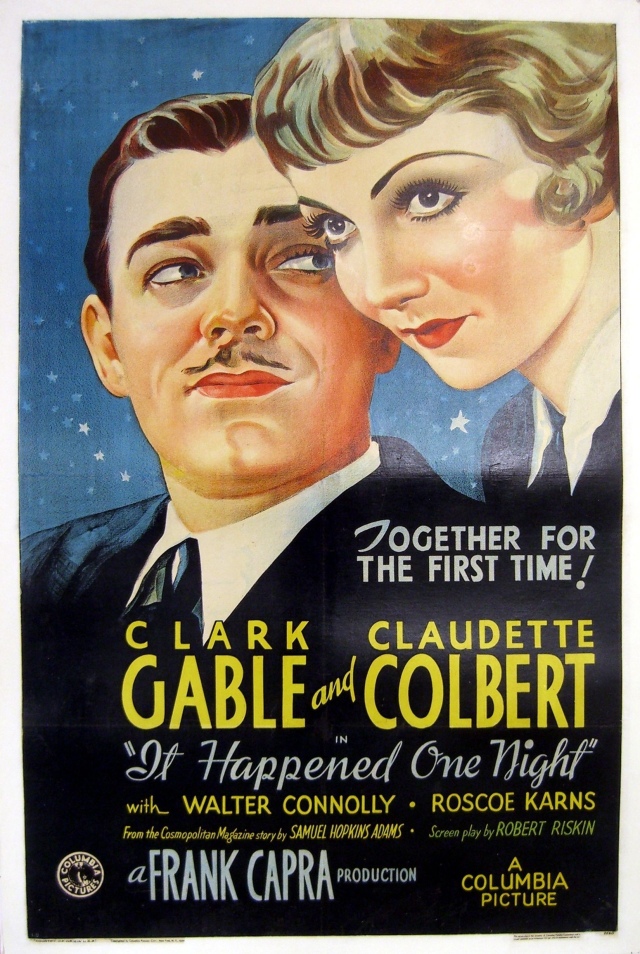 Synopsis
Spoiled heiress Ellie (Claudette Colbert) escapes from her millionaire father Alexander Andrew’s (Walter Connolly) yacht when he kidnaps her after she elopes with and marries King Westley (Jameson Thomas), a playboy aviator whom Andrews thinks is a fortune hunter.

After her escape Ellie boards a bus headed for New York and meets Peter Warne (Clark Gable), a reporter who has just been fired. Ellie’s situation quickly goes from bad to worse as she is first forced to share a seat with Peter and later has suitcase stolen during a stop and then misses the bus at another stop. Peter however on the scent of a big story looks after Ellie, returning her ticket to her and helping her catch another bus.

Peter even saves Ellie from the talkative and obnoxious Oscar Shapeley (Roscoe Karns) and later after their bus forced to stop due to a washed-out bridge Peter shares a room in an auto lodge where they pretend they are married and rent one cabin to save money which Ellie now has little of. Peter tells Ellie that he will help her reach Westley if she will give him her exclusive story and that if she does not cooperate, he will call her father. Ellie reluctantly accepts his terms while he strings a rope between their beds and hangs up a blanket, which he dubs “The Walls of Jericho.”

The next morning, they are almost found out by her father’s detectives but put on a convincing act as a bickering couple. Later Shapeley, reads about the reward and offers to split it with Peter, however Peter convinces Shapeley that he is a gangster who has kidnapped Ellie, and gets Shapeley to flee in terror when talk of guns and a shoot out comes up.

Still worried that Shapeley will go to the authorities, Peter and Ellie leave the bus. They try to hitchhike the next morning, and after Peter’s technique meets with no success, Ellie quickly stops a car by showing off her legs. Peter sulks as they drive, but his petulance turns to anger when the driver steals his suitcase, rousing Peter to chase the car, tie the driver to a tree and then return for Ellie which a car.

On their last night together, only three hours from New York they stay in a motel and Ellie confesses her love for Peter, begging him to take her with him, but he rejects the idea. Later, seeing that Ellie is asleep, Peter rushes to New York, writes his story and sells it to his editor explaining he can’t proposed without having enough money to begin a life with Ellie.

In his absence, however, the owners of the motel throw Ellie out when she can explain neither Peter’s absence nor give them money for the room. Ellie then telephones her father and gives herself up because she thinks Peter has deserted her.

On the day of Ellie and Westley’s formal wedding, Ellie’s dad confronts her about her love for Peters and she confesses that although she loves Peter, she will go through with the wedding because Peter despises her. Her father inadvertently shows her a letter he received from Peter about a financial matter, which both of the Andrews mistakenly assume refers to the reward. Andrews summons Peter to the house, and when he arrives, he presents Andrews with an itemized bill for $39.60, the amount he spent during the trip. He refuses any reward, which impresses Ellie’s dad who makes Peter admit that he loves Ellie as well.

Moments later, as Andrews walks Ellie down the aisle, he tells her of his meeting with Peter and that her car is waiting by the gate if she changes her mind. She does, and runs off again, but this time much to the pleasure of her father. Andrews pays Westley $100,000 for not contesting the annulment of his and Ellie’s marriage, then notifies Peter and Ellie that they may marry.

The newlyweds go to another motel and that night you hear a trumpet as The Walls of Jerico tumble down.

What’s to Like
The impromptu married couple ‘fight’ to dupe the detectives sent by Ellie’s father, the communal singing of “The Man on the Flying Trapeze” and the overnight bus, the wit and banter between Peter and Ellie.

What’s not to Like
The early scene of Ellie’s father slapping his adult daughter in the face, even for the 1930s that’s hard to accept as an action of a loving father.

Thoughts
It Happened One Night was the first movie to win all five major Academy Awards and the comedy and back and forth still holds up very well.

Ellie is a woman of extremes, both clueless and stubborn, conceited and playful—there’s also a streak of wit and resilience about her that makes Peter see her as both a scoop and eventually as someone whom he could spend his life with.

While Ellie is a rich woman running from her troubles as someone who is always told what to do, not realising how tough others have it she does grow and realise the wider world in her travels. Ellie sees how people have to line up for a shower, ends up sleeping on hay and having to eat raw carrots. She witnesses a mother passing out from hunger and listening to real hardship as the mother’s boy tells their story (this movie is set during the Depression).

The back and forth between Ellie and Peter are the core of the movie. While Peter wins most of the arguments Ellie grows as the movie progresses and wins some of her own in particular being the one who successfully gets a car to stop and pick up the stranded couple.

Apparently Ellie running away from the marriage ceremony near the end of the movie is the first time this had occurred in a major movie. The scandal of a woman not following the orders of the men around her!

But the bottom line is this is a fun and witty movie, something really amazing considering it was released over 80 years ago 🙂