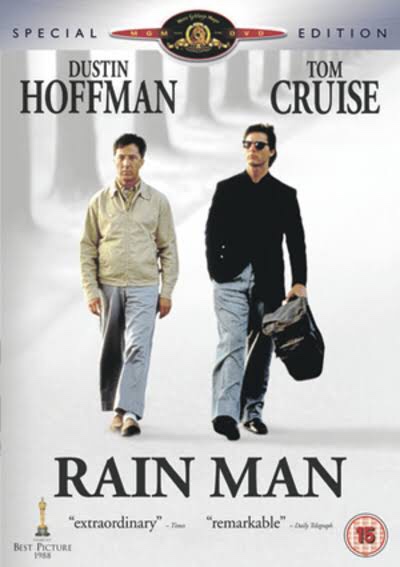 Synopsis
When car dealer Charlie Babbitt (Tom Cruise) learns that his estranged father has died, he returns home to discover that his father’s $3 million fortune is not being left to him. Charlie learns that the money is being left to the mental institution which has being treating his high functioning autistic older brother named Raymond (Dustin Hoffman) that Charlie didn’t even knew existed. This leads an angry Charlie to take Raymond on an unauthorised trip on a cross country trip that leads to surprising discoveries, new experiences for them both and fundamental changes for Charlie.

What’s to Like
The understated emotion which made the movie feel more emotional when required, the vast American landscape at it’s best, the slow journey Charlie goes from selfish to being able to listen to others (both his autistic brother but also his girlfriend Susanna), great slow pacing of the movie, realistic ending.

Thoughts
Charlie starts the movie as a very selfish individual who findings lying as easy as breathing. He only care about others to us them. We learn why he is like this with this unloving distance father who never acknowledged his achievements and kept him in jail for two nights after Charlie took his father’s vintage car without permission.

On discovering he has an older autistic brother Raymond and that his inheritance is going to the mental institution looking after Charlie he gets angry. Charlie effectively kidnaps Raymond, by lying to his girlfriend Susanna, and hopes to ‘ransom’ custody of him for his half of the inheritance.

Forced by Raymond’s refusal to get on an airline, other than Qantas, as they have all previously crashed, they begin a cross country journey from Cincinnati to Los Angeles that allows Charlie to really know his brother. Raymond being autistic forces Charlie to actually listen to him, Charlie can’t bully Raymond into behaving.

Throughout their journey together, after Susanna leaves Charlie for mistreating Raymond, Charlie slowly starts understanding his older brother. He learns the when he was very young he called Raymond ‘Rain Man’, he sees how upset Raymond gets with hot water filling a bath and realises Raymond was sent away to mental institution after accidentally hurting the younger Charlie. They are connected from early in life and that interaction, that accident, changed their lives forever. Charlie takes small steps towards being a caring brother and accepting Raymond only to backtrack.

However on hitting Las Vegas, Charlie hopes to harness Raymond’s finely-honed mathematical skills to win big at blackjack; but this exploitation of his brother’s affliction eventually forces Charlie to reassess his own values, or lack of them. It’s the last time he takes advantage of Raymond. He given let’s Raymond drive in a controlled environment soon afterwards.

Charlie really shows he has changed in the end when he turns down some of the inheritance money to fight to keep Raymond but then gives him up when he sees how upset Raymond is when getting asked questions by a doctor about who he wishes to stay with, either Charlie or Dr Bruner. Giving up Raymond without financial reward because for now it is best for Raymond shows how far Charlie comes during the movie. While Raymond can’t really change, he does have new experiences including getting kissed by Susanna, in the end Raymond changes and even saves his younger brother.

Dustin Hoffman is great and received an Academy Award but this is probably Tom Cruise’s great performance, not as a movie star but as a true actor. The movie received 8 academy award nominations, winning 4 which are all well deserved. I liked this movie as a teenager and I still like it now 3o years later.

This movie also changed how many people perceived the autistic; suddenly they weren’t ‘retards’ to be mocked or shut away and forgotten. Very few movies can both entertain and at the same time have positive effects on the world. This is that rare film.

A World traveller who has so far experienced 71 countries in this amazing world. https://nathanburgessinsights.com/travel/
View all posts by Nathan →
This entry was posted in Movie Reviews and tagged Best Picture, Dustin Hoffman, Rain Man, Tom Cruise. Bookmark the permalink.