Today was the first of three long travel days with us ending eventually ending up at Lake Bunyoni (Uganda) for the likely highlight of the tour the Gorillas. Today’s road trip between Masai Mara and Eldoret took just over 11 hours with a 6.30 am departure, meaning breakfast at 5.45 am and packing tents starting at 5.15 am. Early day’s are the norm of this trip.

The most interesting thing today was watching the landscape change from semi desert to lush green hills in the mountain range. It would be easy to believe in the mountains ranges you were in Victoria with the lower temperatures, brief rain, strong sunscreen and green hills. The Kenyans in this area cultivate a wide range of tea. No time to stop and smell the tea leafs.

During our trek across Kenya during one of our stops I observed the locals watching the inauguration of their President after a disputed election process. We had been warned to not talk politics or to take photos of any rallies either for or against the Government. In the end there were no such political events to observe except everyone listening closely to the President’s words.

The Greenswood Campsite in Eldoret will likely be one of the best campsite outside the main cities. Build only 2 years ago it was enclosed and we were the only visitors on this day giving us full use of the place. I know I enjoyed the campsite fire into the night. 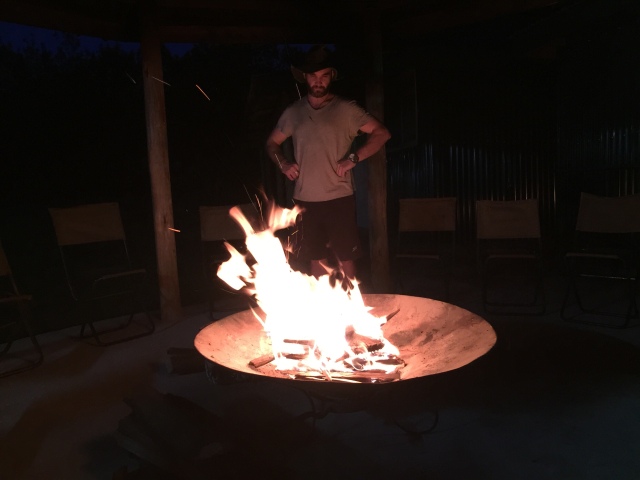 My team’s duties for today was after meal clear up. My team members are Stephanie, Ang, and James. Each day you get rotated from helping prepare meals, cleaning up the meals (mostly doing the dishes) and cleaning up the truck (swiping and moping). Two team members are permanently on ‘muscle’ duty basically moving the heavy gear during the day. The system works well as it forces interaction at least in your group.

Tomorrow will be an even earlier departure at 6 am meaning 4.45 am wake up to pack and pull down the tent. Camping brings you back to nature but it happens god damn early. Another 50 days of early mornings might do me in, or at least I’ll need a week off to recover 🙂

A World traveller who has so far experienced 71 countries in this amazing world. https://nathanburgessinsights.com/travel/
View all posts by Nathan →
This entry was posted in Travel, World Trip 2017-2018 and tagged Eldoret, Kenya, Masai Mara, On The Go Tours. Bookmark the permalink.