After another lovely buffet breakfast at the H2O resturant at Bali Dynasty Resort Erin joined the Kids Club and the rest of us headed down to central Kuta and the Discovery Shopping Centre.  The walk along the beach once again provided stunning views.  The shopping centre didn’t turn out to be two impressive so it was decided to head out for some street shopping. 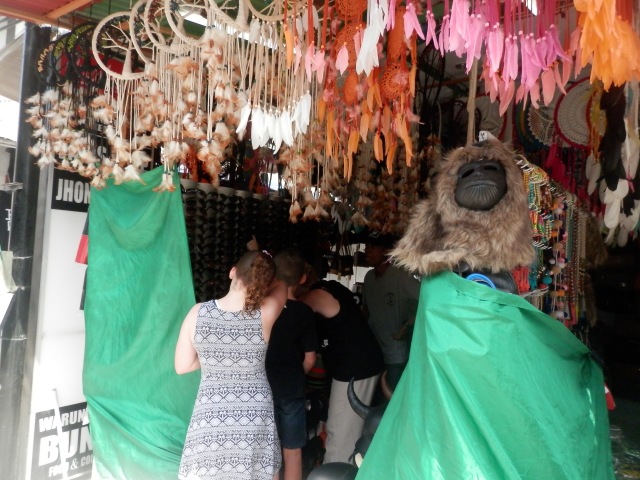 It turns out that most tourist aren’t out in the streets at 10 am so the vendors who were open really wanted our business.  Eventually Kara and Lana selected a street shop, Lana found Harry some very cool sunglasses and Kara found some clothes for Erin and Jason after some limited bargaining.  It was very hot and humid out there so a stop off at the convenience store found very cheap soft drinks (around 0.70 cents Australian for Spirite 330 ml bottles).  Just the think to replace everything lost to sweating in the heat.

The early afternoon was about the pool for the Lana, Kara and the kids.  Lana even went on the giant water slide but had to prove this with photos to Darby!  Meanwhile Darby and Erin got their much wanted hair braiding although they didn’t have much fun getting it done 🙂

Around 3 pm our booked tour to visit the Uluwatu Pura (Temple) at sunset with a kecak and fire dancing performance followed by dinner on the beach at Jimbaran Bay.  Pickup was on time but Harry and Lana took some extra time preparing.  We where booked with a company called Tour East, the tour was only supposed to be the six of us (maximum booking) but they added another person.  This caused considerable issues as that person wasn’t at their hotel and about 15 minutes after leaving we were called back which obviously cut into our time at Uluwatu and spoiled to some degree the all family affair.

The drive to Uluwatu was enlightening as it gave us a first chance to see what Bali is actually like and see people just going about their day to day lives.  Motorbikes are the main transportation option and they can be loaded down with a lot of items.  Apparently there is also no speed limits in Bali so best to let the locals drive!

The Uluwatu Temple is a Balinese sea temple established by a Javanese sage, Empu Kuturan in the 11th Century.  The cliff setting is stunning with a very big drop.  The temple is inhabited by monkeys, who are notorious for snatching visitors’ belongings and we saw an attempt while we were there with one of the monkeys showing it’s teeth when missing out.  We then hiked up to the Uluwatu Temple along the cliff, mobility impaired people won’t be able to visit.

We then hiked to an outdoor stadium and with the sunsetting, we enjoyed stunning ocean views while watching a performance of kecak, which is a traditional Balinese dance, the performers chant around a fire while telling the story of Rama (the hero) and Ravana (the evil demon).  The performers occasionally and hilariously interacted with the audience.  Erin started falling asleep on my shoulder during the show until the end when she found the performers dressed as monkeys very funny.

​After the show we left to go to Jimbaran Bay for a dinner under the stars on the Kedonganan Beach.  Our extra passenger went off to a separate table and we enjoyed the seafood dinner.

Although Harry ended up ‘choking’ on a very small bone so wasn’t very happy for a while.  Erin thought a landing plane was a falling star for a long time.  Returning to our Resort both Erin and Harry fell asleep.

A World traveller who has so far experienced 71 countries in this amazing world. https://nathanburgessinsights.com/travel/
View all posts by Nathan →
This entry was posted in Family & Friends, Travel, World Trip 2017 and tagged Bali, Indonesia, Kuta, Uluwatu. Bookmark the permalink.