Day two was extremely full and there G Aventures – National Geographic Discover Southeast Asia tour got underway.  An early 6 am breakfast was necessary for today’s activities.  Despite having been in Bangkok back in 2012 I was looking forward to a revisit to same of the same places on what is the only day overlapping with a previous trip.  I meet the full group today our Chief Experience Officer BenGy (Benchaporn Amchang) and my nine other tour members; Graham, Ashley, Sarah, Josie, Damian, Karen, Chris, James and Bal.

The Chao Phraya River Canal boat ride was amazingly insightful, especially this time as we were on the river and the different canals so early with no one else on the water and the residents really just getting up.  You could see some very expensive riverside houses right next to older houses falling into the canal.  The country must be doing okay as it seemed like some of those old houses are making way for more modern, expensive ones.  Still you could see local fishing in the river.  A highlight was buying bread from a young monk and feeding the catfish, who were many.

Next up was a visit to the giant Reclining Budha, measuring over 45 metres in length this is a stunning display.  One of the things I didn’t notice last time was the detailed statues around the complex housing the reclining Budha.  If these statues were alive I expect I would have been quickly dispatched to the afterlife.

Next up was the Grand Palace, the traditional residence of the Emporer of Thailand (now in a modern more facility).  The Palace is surrounded by temples which we visited first the highlight being the Emerald Buddha who’s ownership has been in dispute with Burma over the last 500 years, in short Burma stole / won the Emerald Buddha and displayed it for 400 years before Thailand won in back in a battle.  The Emerald Buddha is smaller than you might think but still magnificent. 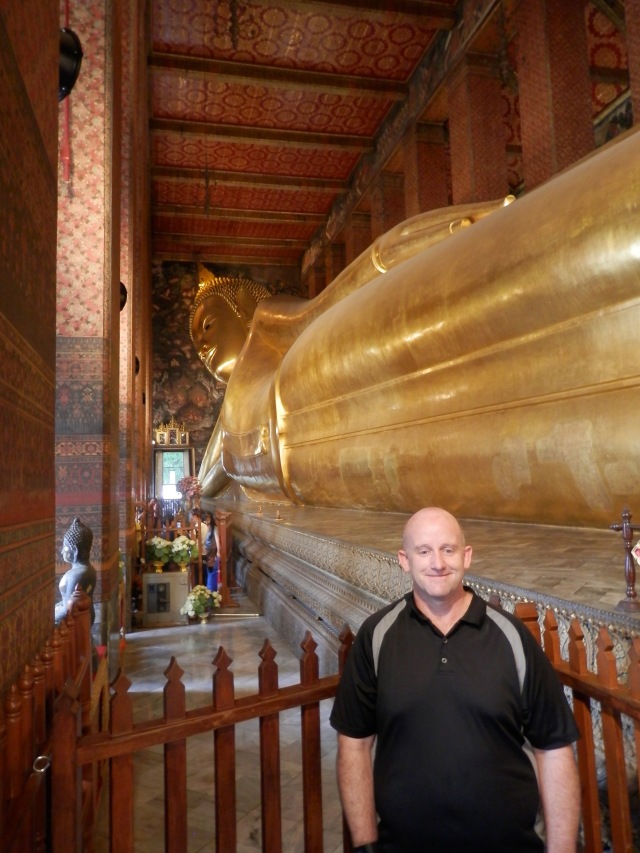 At this point it was off to the Suvarnabhumi Airport for our flight to Chiang Mai at 3.20 pm.  I had only been at this airport less than 23 hours earlier and already that seemed days ago.  Our flight was with Thai Smile who I noticed had smiling flights attendants all wearing short skirts (short being just above the knee) and all helped everyone quickly with all requests.  The small snack was presented in a classy gift bag, it just left great.

On arrival in Chiang Mai I could seeing the threatening storm clouds which 30 minutes later burst in an intense but short rain storm.  This storm hit just as we arrived at Lanna family house which had 4 generations living under the same roof and settled on this land 6 generations ago (around 160 years ago).  The house was right in the old Golden Triangle named for the drug trade.  We were greet with traditional straw hats and local tea.  Across the next 2.5 hours we were guests who got to experience various local food, for example a gum like product made from several different plants, the herbal and food garden and than a traditional Khantoke Dinner (sitting on the floor).  The food had a real favour kick in it, usually 2 minutes after you had consumed the food my taste buds came alive with different textures.  The youngest member of the family a 3 year old become the unofficial entertainer as she pulled apart cushions and put them together again, or at least tried. 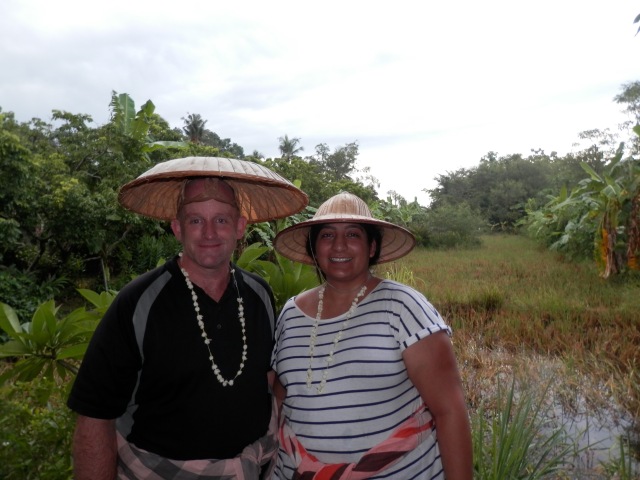 A World traveller who has so far experienced 71 countries in this amazing world. https://nathanburgessinsights.com/travel/
View all posts by Nathan →
This entry was posted in Travel, World Trip 2016 and tagged Bangkok, Chiang Mai, GA-Discover-SE-Asia, Thailand. Bookmark the permalink.