Well the forecasters were right today was rain with more rain.  Luckily the hotel provided umbrellas for those that needed it otherwise we would have drowned.

First up was a visit to the Golden Pavilion at Kinkaku-ji, also known as Rokuon-ji, which is a Zen Buddhist temple established in the 1600s.  Luckily the rain stayed away for this visit which gave us a chance to enjoy this temple as it shined in the fading light.  I also noticed some locals wearing traditional Japanese clothing, something I was to encounter a lot more in Kyoto compared to the rest of Japan.

Next visit was to Daisen-in which is a sub-temple of Daitoku-ji, a Zen temple which is one of the five most important Zen temples of Kyoto. The name means “The Academy of the Great Immortals”.  The local monk explained the meaning and structure of this Zen Garden and some of the elements it must have; a Buddha , water, rocks representing animals, and sand.

The last planned historic sight was a visit to Nijō Castle which was the residence of the Shogun who ruled Japan above the Emperor for over 350 years.  The Shogun was the leader of the samurai.

Despite having more power than the Emperor they always showed respect to him as the Emperor was more a spiritual leader during this period.  The Shogun in his castle was mostly protected by females as they were apparently more trustworthy then his men!

Next up was a visit to Kyotot markets, basically selling fresh food and trinkets.  I spent most of our free time enjoying lunch with members of our group but others went out to find bargains.

We all agreed to undertake a couple of optional activities tonight; A Tea Ceremony (costing 2,000 Yen), and a Ninja Show (costing 3,800 Yen).

The Tea Ceremony was mostly about being educated in the ritual.  A Tea Master (female) did serve us Green Tea.  The visitors make the tea themselves and traditionally the host only talks to the lead guest who represents the entire group.

You also get a sweet with your tea. Every movement has a meaning during the ceremony.  A proper tea ceremony can last 4 hours, ours was the fast version of around 50 minutes.  As with most traditional rituals in Japan you are sitting on the ground which can be very uncomfortable. 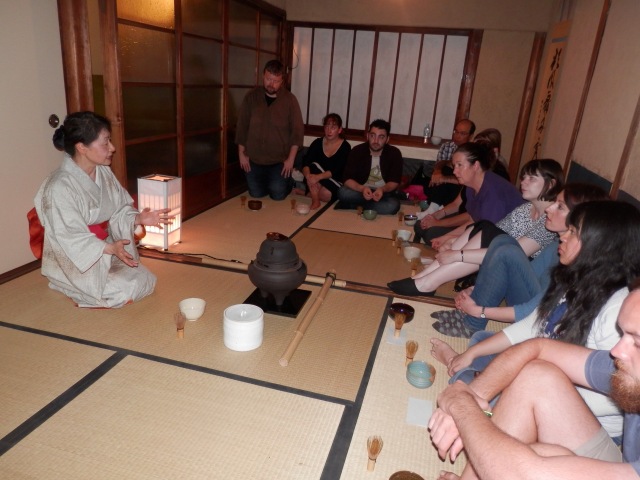 Last up was the a Ninja Show which we walked to in the pouring rain taking around 50 minutes to get there. Ted took us though the Giesha district hoping to see one of these magnificent Giesha Ladies but no luck probably due to the heavy rain.

The show was impressive and funny, very over the top like you sometimes see in Japan. The light sabre fight in particular was very funny 😂. The price included a drink and a meal which was a sampling of lots of different Japanese food.  A very impressive setup which I’d recommend to anyone visiting Kyoto.

A long day that saw us back at the hotel after 10.30 pm.  If you do the options of this tour it definitely makes the tour feel full and express.

A World traveller who has so far experienced 71 countries in this amazing world. https://nathanburgessinsights.com/travel/
View all posts by Nathan →
This entry was posted in Travel, World Trip 2015 and tagged Japan, JapanG, Kyoto. Bookmark the permalink.