On Friday 23 January I got to undertake one of my annual rituals, attending the first tennis grand slam event of the year The Australian Open. Thanks to a Christmas present from my sister Lana, I got to spend the day with my brother Reagan at Hisense Arena using ground pass tickets.

Luckily for me this was on a warm day, mid 20 but I still was a little sunburned at the end of the day despite lots of sunscreen, visitors to Australia be warned we have very high UV factors here.

Melbourne Park (formerly Flinders Park) has been home to the AusOpen since 1988 and they only years I have missed attending are when was overseas in 2000, 2010 and 2013. So I guess I’m a tennis nut! I think a lot of locals don’t get how lucky we are for $32-39 you can get a ground pass a watch top rank players a few metres away who would be a massive final anywhere else in the world. With Melbourne hosting so many big sporting events I guess it’s easy to take it for granted.

So I got to see four matches all up and explore the ever expanding complex, mist fans and bean bags to sit on are some of the better additions over the years :). The arena was packed for local Aussies Bernard Tomic and Sam Groth with Bernard finally showing some maturity, he might be able to turn himself in a top 20 player one day.

The most impressive player however was Andy Murray who was all class. With Federer losing today it’s really opened the draw up for Murray. I think I might have been watching this year’s men’s winners.

Tennis is an unusual sport in that the men’s and women’s tours are both big. In fact at the Australian Open both men and women get the same prizes. Tennis is a sport for both sexes, they even have mixed doubles, so it’s very inclusive of everyone. I’ve even played with and against three generations from the same family on Saturdays, male and female. For a sport based on singles it can be surprising how community oriented tennis is. 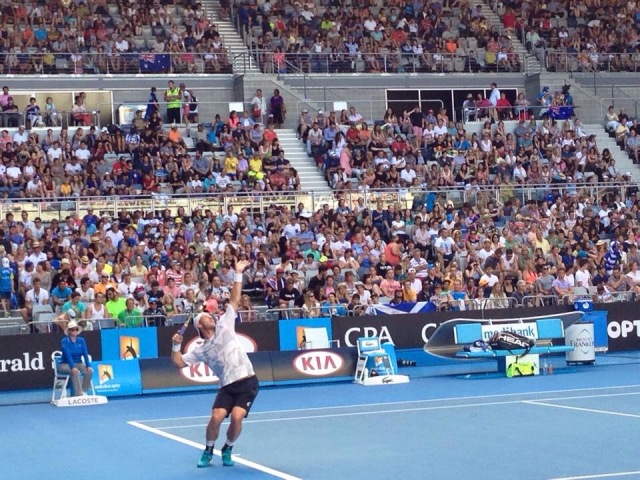 A World traveller who has so far experienced 71 countries in this amazing world. https://nathanburgessinsights.com/travel/
View all posts by Nathan →
This entry was posted in Family & Friends, Sport and tagged AusOpen. Bookmark the permalink.