As we weren’t leaving Granada until 12 this created an opportunity to explore the town. Following the advice of James and Robin I sought out their driver from yesterday who provided them a good under view commentary in English. Our new tour member Rianne de Groot joined me today which gave us a chance to get to know each other on this warm day.

A horse carriage ride is a great way to see a town an it only cost $10 USD. Actually it’s worth noting that it is easier to use US dollars then the local currency, plus it is a very inexpensive country.

First stop on our tour was the old Central Train Station that shut in 1964 when all trains ceased operation in this country. They still have the old Presidential carriage and the station itself is still impressive. I have no idea why trains ceased operation maybe they thought the car would solve all problems or it was difficult to operate in a country with so many mountains and lots of earthquakes and volcanoes.

After seeing the oldest hospital in the country (now abandoned) and the oldest park of driver took is to the oldest house which is over 450 years old. This was the house William Walker called home for a time. William Walker was an American who raised a private Army and took over Nicaragua which the long ter plan of taking over Central America for the USA. He installed himself as President for a time. He did united Central America, against him. He was arrested and returned to the USA to serve time for breaking the Neutrality Act but was pardoned and once again raised a other Army. Next time he was captured they excited him. This was the start of the USA’s interference in this region.

On the way to the edge of Lake Nicaragua we stopped at the impressive local Cathedral. The town is 95% Catholic and was eleven churches. At this point the driver let Rianne try out the drivers seat, a privilege not offered to me!

Lake Nicaragua is the largest lake in Central America but unfortunately the area around Granada is extremely polluted and you can not swim without risking disease. They are however starting to clean up the water. Looking out over the edge of the Lake it felt like looking at the sea with the vast surface and the waves rolling in.

At noon the group set off on the 1.5 hour drive to catch a one hour ferry to Ometepe. Ometepe is an island in the middle of Lake Nicaragua created by two volcanoes; Conception and Maderas. Conception is still active, the last major blast was in the 1950s but they has been a lot of minor eruptions and earthquakes in the last 8 years.

We are housed at homestays for the next two nights. For tonight there was a group dinner in the common area from which I watched the sunset over the lake as others played volleyball. 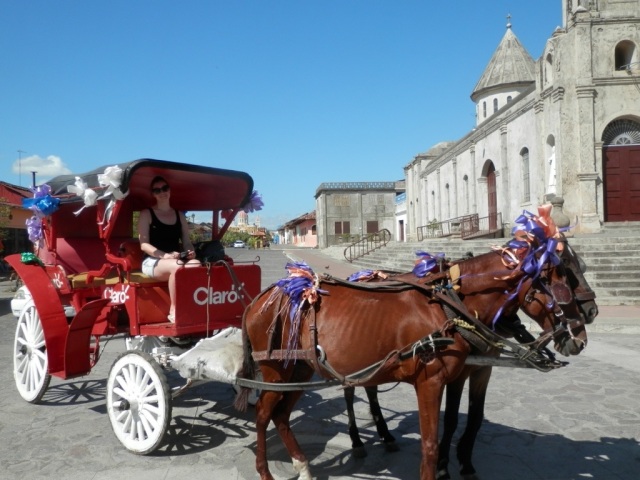 A World traveller who has so far experienced 71 countries in this amazing world. https://nathanburgessinsights.com/travel/
View all posts by Nathan →
This entry was posted in Travel, World Trip 2012-2013 and tagged Granada, Nicaragua, Ometepe. Bookmark the permalink.