I had a brilliant time today.   First I got a call at 7 am local time (5 am as far as my body was concerned!) asking if I wanted to change trip as I was the only one booked, after advising no I couldn’t change this tour date I was told no problems we will go ahead with just two people.

I was picked up at 8 am.  We drove down to Matamata (Hobbiton).   Passing through the historic gold-mining town of Waihi to Waihi Beach and the picturesque mural town of Katikati via a coastal road.

We stopped at the beach resort of Mount Maunganui to admire the stunning beach in the very wet and windy conditions (I was nearly blown over), we headed to the impressive Kaimai Ranges with time to admire the panoramic views over the Matamata plains below (what I could see because of the fog).

Then the main event.   After a picnic lunch I was collected by the Hobbiton tour group and we spent the next 2 hours going over the set.   It was awesome to see the Hobbit houses and party area, it’s a pity they took down a lot of the set.  Apparently this is the only remaining set in NZ as per New Line cinema directive – this place only survived from being pulled down due to flooding if you can believe it. 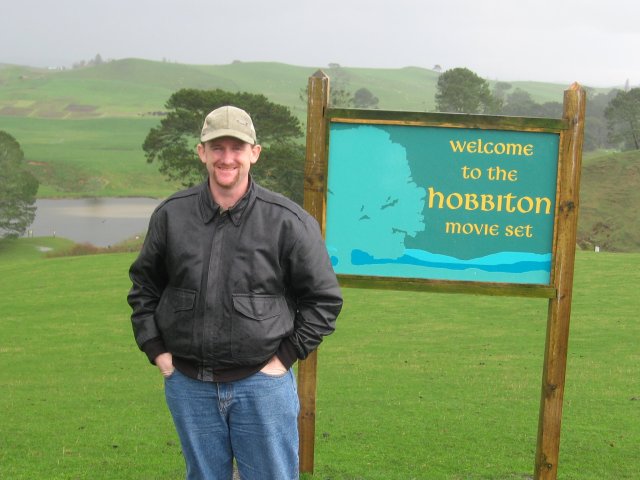 The farm is stunning, and we were lucky enough to only get a little bit of the rain (during the day it was the hardest rain I’d seen since Ireland in 2000). One of the visitors managed to slip into the mud, after that we were all very careful (especially me since I didn’t have share clothes for my work trip coming up).   Only the outdoor shoots happened on location (plus those just inside Bilbo’s house showing the outside area).

This was a great little tour  and very much worth it. On the way back to Auckland I got to watch special edition of the Fellowship of the Ring.   Very cool to see as I could pick out all the places I had been in.   It was 7 pm local time when I got back into Auckland and raining so I settled down to Sky News and found out my footy team had won!!!

A great day and worth the trip to NZ.  Tomorrow I have a flight back to Melbourne and then a change to a domestic work flight to Brisbane.

A World traveller who has so far experienced 71 countries in this amazing world. https://nathanburgessinsights.com/travel/
View all posts by Nathan →
This entry was posted in Short Breaks, World Trip 2007 and tagged Hobbiton, Matamata, New Zealand, NZ2007. Bookmark the permalink.