On the way to Latvia in the morning we visited Trakai (Lithuania).   This is the site of a stunning old castle.   The defences of this place are amazing; they had at least 4 different sections they could fall back into.   The castle dates from the 14th century and actually never fell to an enemy. Trakai Castle was the capital of the former Grand Duchy which ruled this area.   One of the best castles I’ve seen in Europe.

On the way into Riga we stopped at the Hill of Crosses which represents those who died or disappeared between 1940 and 1989.   Under the USSR the displays were pulled down periodically but locals kept coming back.   A lot of the crosses only have birthdates as no one knows the exact death dates for those who disappeared. 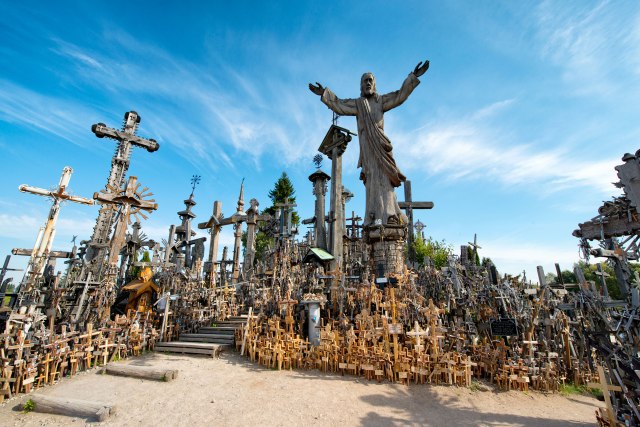 A World traveller who has so far experienced 71 countries in this amazing world. https://nathanburgessinsights.com/travel/
View all posts by Nathan →
This entry was posted in Travel, World Trip 2006 and tagged Latvia, Lithuania, Riga, Trafalgar, Trakai. Bookmark the permalink.