Today was my tour of the Vatican City which officially is the world’s smallest country (no passport stamp unfortunately).   We had to wait close to 2 hours to get inside for the security search (my pocket knife made it in somehow) but it is definitely worth it.

The tour starts with the Vatican Museums and they are outstanding.   A fair percentage of the art is surprisingly from before Christ so therefore there are few  Christian paintings but instead pagan, Greek and obviously Roman scenes.   It would be hard to value the museum (check out my photos of the hall ways) but it would be virtually impossible to purchase this kind of artwork (not even Bill Gates has enough money).

Raphael’s painting of the ‘School of Athens’ is pure genius.   It includes the greats from the fields of science, mathematics and other fields.   You also see Jews, Muslims and other non-Christians in the painting as the point of the painting was of people learning Gods mysteries (different story today however).

While you can take photos in most places in Vatican City the Sistine Chapel is totally different.   You can’t even speak and you must be covered up (and this was a very hot day).   Michelangelo’s painting of the ‘Book of Genesis’ on the roof is stunning; you just have to see it to believe it.   Pagan and Jewish figures appear in this painting as well, this was created at point in time when the Pope saw Jews and Pagans as the foundation of the Church, very much a different story just 20 years later.   The Sistine Chapel (Pope’s church BTW) is where the College of Cardinals recently met and elected Benedict 16 as the Catholic leader.

As good as the Sistine Chapel is St Peter’s Basilica is in a league by itself.   The Dome which was completed in 1570 is 119 high and is still the highest building in Rome (so no high-rises).   The high altar is where the Pope and only the Pope can say mass.   There are at least 8 other altars for smaller masses.   You can take photos with flash but the place is so incredibly large and has shade and natural light everywhere it is very hard to get good shots to demonstrate the size of this place.  Finally I finished in the Piazza San Pietro which is where the Pope addresses his flock and new Pope’s come out on the balcony.   The Obelisk in the square was taken from Egypt over 3,000 years ago (it is older than this however).

I would strongly recommend a visit to the Vatican to anyone who visits Rome. 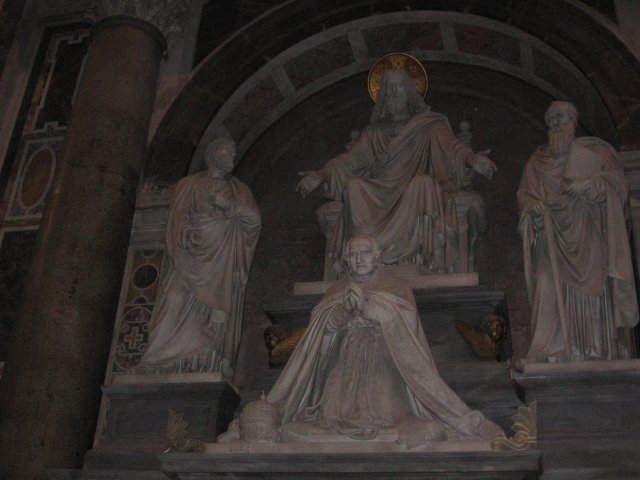 A World traveller who has so far experienced 71 countries in this amazing world. https://nathanburgessinsights.com/travel/
View all posts by Nathan →
This entry was posted in Travel, World Trip 2006 and tagged Italy, Rome, Vatican. Bookmark the permalink.